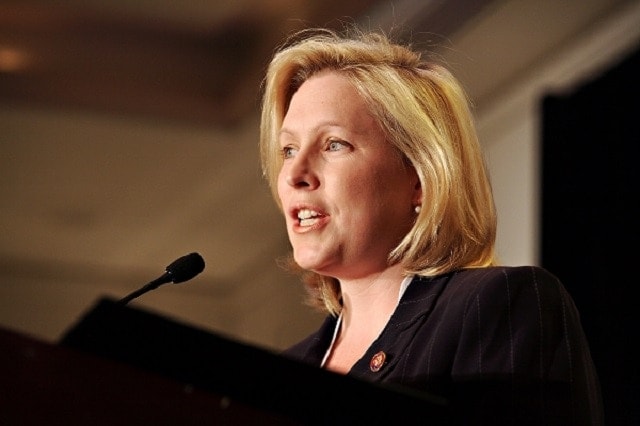 New York Democrat Sen. Kirsten Gillibrand is seeking to make the transfer of two or more guns to someone not legally able to bear them a felony. (Photo: New York Daily News)

Senators from Illinois and New York are making a bid to bring back legislation that would make selling guns to a prohibited possessor worth 20 years in federal prison.

The proposal, to be filed this week in Washington, is sponsored by U.S. Sen. Kirsten Gillibrand, D-NY, and co-sponsored by Sen. Mark Kirk, R-Ill. It is a repeat of a failed bid last session to make gun trafficking a crime.

The earlier attempt by the same two lawmakers, the Gun Trafficking Prevention Act of 2013, never made it out of committee but Gillibrand is more hopeful this time around.

“I am not willing to throw my hands in the air and say nothing can be done while lives are being senselessly lost due to weapons being in the hands of criminals,” Gillibrand told the New York Daily News. “We all have a moral obligation to make our voices heard and say enough is enough.”

The new bill, termed the Hadiya Pendleton and Nyasia Pryear-Yard Gun Trafficking and Crime Prevention Act of 2015, is named after two teens killed in New York with guns traced to out-of-state origins.

The sponsors contend there is no federal crime that specifically recognizes gun trafficking. It would modify current law to make it a felony to transfer two or more guns in an instance where there is a reasonable belief that doing so would be in violation of the law. The crime would extend to those directing or assisting others in such transfers. Penalties for those convicted could run as high as 20 years with ringleaders facing 25.

Exceptions would be made for gifts and inheritances, so long as the recipient is not prohibited by federal, state or local law from owning a firearm.

The legislation, which hasn’t officially been introduced, already has the backing of gun control groups to include New Yorkers Against Gun Violence.

High profile law enforcement leaders are championing the proposal in the wake of the shooting of the fifth New York Police Department officer in five months. The most recent officer to be killed,  Officer Brian Moore, 25, was shot in the head by a wanted felon with a gun stolen from Georgia in May.

“Generations ago, this kind of brutality was settled in neighborhoods by fistfights, now more often or not it’s with guns and it’s because of the availability of them,” said NYPD Chief James O’Neill.

This attempt to strengthen the nation’s gun laws comes amid a flood of anti-gun legislation introduced in the weeks following the mass killing at Emanuel AME Church in Charleston, South Carolina, which left nine dead.

U.S. Rep. David Cicilline, D-RI, announced a trio of new measures earlier this month to that would establish National ASK Day and expand background check data. Senators to include Chuck Shumer of New York, Pat Toomey of Pennsylvania and Joe Manchin of West Virginia have made further remarks in recent weeks about launching legislation of their own.

However, with historic Republican majorities in both chambers of Congress and the nation growing closer to a presidential election, the odds of any gun control bill making it through a GOP barricade are likely slim.