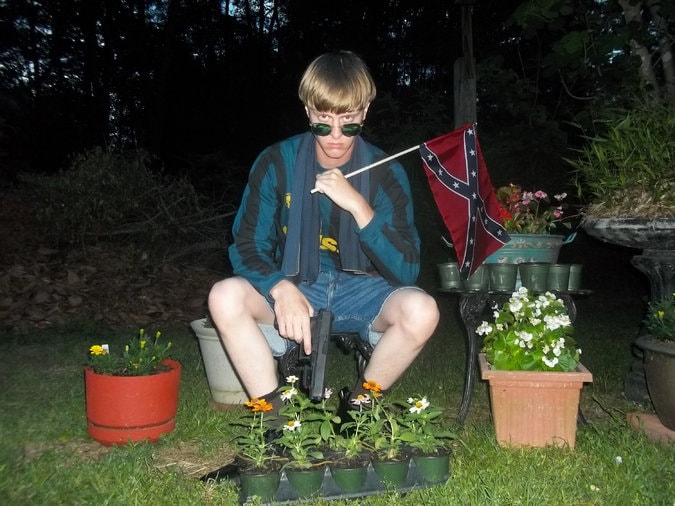 A photo from a white supremacist website showing Dylann Roof, the suspect in the Charleston church shooting, with his gun, flag and potted plants.

The Federal Bureau of Investigation on Friday admitted it made a mistake when the agency cleared the alleged Charleston, South Carolina, church shooter in the purchase of a handgun in April.

The suspect, who sat through an hour of Bible study last month in the the African Methodist Episcopal Church before opening fire and killing 12 parishioners, passed a federal background check despite having a felony drug charge on his record.

Dylann Roof attempted to purchase a handgun on April 11, a Saturday, The next business day, April 13, an FBI examiner in West Virginia was assigned the case.

FBI Director James Comey told reporters the agency examiner who reviewed the alleged shooter’s record saw he had a felony drug arrest in South Carolina on March 1, which alone isn’t a disqualifying event.

“As a result, this charge required further inquiry of two potential reasons to deny the transaction,” Comey said. “First, the person could have been convicted of a felony since the arrest. Second, the underlying facts of the arrest could show the person to be an unlawful drug user or addict.”

The examiner looked on the Lexington County court website to see if the arrest ended it a conviction, but no such conviction could be found. The alleged shooter was, however, listed as a defendant.

Next, she requested details from the court via fax and also faxed a request to the Lexington County Prosecutor’s Office. The Sheriff’s Office said the case wasn’t theirs and that she should check with the Columbia Police Department, who was the arresting agency, Comey said.

Not knowing the geography, the examiner’s search for “Columbia” turned up “West Columbia,” the police agency for which told her it had no record on the suspect.

“The contact sheet for Lexington County did not list the Columbia police. Instead, Columbia PD was listed as a contact only on the sheet for Richland County. But the examiner never saw that sheet because she was focused on Lexington County,” Comey said. “So the court records showed no conviction yet and what she thought were the relevant agencies had no information or hadn’t responded. While she processed the many, many other firearms purchases in her queue, the case remained in ‘delayed/pending.’”

By April 16 the case was listed pending, so the gun dealer went ahead with the transaction. Comey said FBI followed protocol and the gun dealer “exercised its lawful discretion” in allowing Roof to purchase the gun.

“But the bottom line is clear: Dylann Roof should not have been able to legally buy that gun that day,” Comey said.