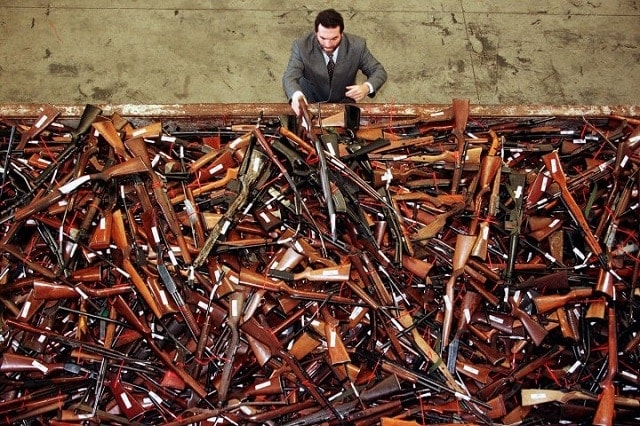 An Australian police official inspecting a pile of about 4,500 prohibited firearms turned in under the Australian government’s buyback in Sydney in 1997. (Photo credit: David Gray/Reuters)

In response to Australia being cited as a model of gun control by president Barack Obama and others, the National Rifle Association paints the experiment on the island continent as a disaster.

At least three times in as many years, the president has hailed Australia’s 1996 National Firearms Agreement as a an example of effective gun control. The latest plug came during an interview last month with comedian Marc Maron and published on his WTF podcast.

“When Australia had a mass killing – I think it was in Tasmania about 25 years ago – it was just so shocking to the system the entire country said, ‘well, we are just going to completely change our gun laws,’ and they did. And it hasn’t happened since,” the president said.

In 1996, Australia adopted its sweeping gun control scheme following a mass killing known as the Port Arthur Massacre, where a gunman killed 35 people and injured 24. The measure led to severe restrictions on firearms, including an outright ban on most semi-automatic and pump-action rifles and shotguns. This in turn, led to the turn over to the government of some 700,000 illegal firearms.

This mass surrender of the nation’s privately owned guns is what the NRA takes exception to in an article published last week in America’s First Freedom, a publication of the gun rights organization.

“What occurred in Australia in 1996 was not just a stricter gun law – it was a mass confiscation. To paint it as the product of a national consensus is an insult to those Australians who were furiously opposed to being disarmed by their government,” contends the piece.

The result, argues the NRA, is a 69 percent increase in armed robberies, as criminals have no problems obtaining firearms.

“This is the gun-control regime that our president applauds for its decisive resolve,” reads the piece. “It robbed Australians of their right to self-defense and empowered criminals, all without delivering the promised reduction in violent crime.”

The article brought swift retort from Australian media who argue the NRA piece used a single study reference from 2005 and note later research conducted in 2010 that would tend to show gun-related homicide was reducing by as much as 7 percent per year in the country.

Conversely, Australia media also reported Monday that police in the Southern Australian city of Canberra are looking for suspects in a string of five shootings within 10 days earlier this year. It is believed that the suspects are involved with gang-related outlaw motorcycle groups.

However, neither the NRA, Australian media, or the president made note of the 2011 Adelaide Siege in which a gunman shot six, three fatally, an event that meets the FBI’s definition of “mass killing.”

It is thought that over 250,000 long guns and 10,000 handguns are unaccounted for across the country, stirring calls by officials for a permanent amnesty on handing in unregistered weapons.

Meanwhile, gun control advocates there are seeking to add some types of lever-action shotguns to the list of firearms that are prohibited.