The Gadget for Glocks–a safer way to re-holster (VIDEO)

One of the known risks of carrying guns with passive safeties is holstering and re-holstering a loaded handgun. When the gun is not in the holster garbage can get in, and that means there is a small — but very real — chance of an unwanted discharge and the accompanying danger of a self-inflicted wound.

For this reason alone it’s important for everyone who carries to practice holstering just as much as drawing no matter what or why they carry, whether it’s concealed-carry for self-defense, on the job or in competition circles.

The Gadget is a sort of thumb safety, but like none other. The Gadget, designed specifically for Glock pistols, replaces the striker retainer plate and, when pressed on, prevents the striker and trigger from being pulled. Take your thumb off the Gadget and the pistol operates normally.

“It works like this,” explains Jerking the Trigger. “The shooter places their thumb on The Gadget and provides pressure while holstering. If they feel any resistance while holstering or they feel the striker moving via The Gadget, they can withdraw the handgun and check for holster obstructions.” 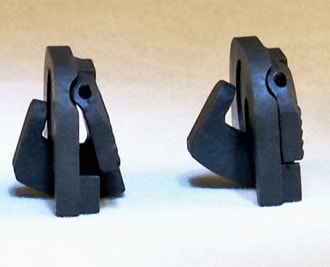 The Gadget’s simplicity is a good fit for Glock pistols. (Photo: Todd Green)

Like a lot of independent projects the team is looking to crowd-fund the Gadget. At this rate it’s going to happen: in less than a day they raised more than three-quarters of the money they need to make the Gadget a commercial product. Their goal was $40,000 and they’ve successfully raised the money to launch the Gadget, raising more than $30,000 in the first day.

The Gadget doesn’t alter the function of its host pistol at all. It only adds a layer of security, something all shooters can appreciate. “The Gadget provides an extra layer of safety when holstering,” says the Gadget team. “It is not intended to replace awareness and safe gun handling. But it creates an additional link in the chain to help avoid accidents.”

It’s also an inexpensive added layer of security. Backers who pledge can get a Gadget for only $50 or two for $95. Larger pledges are available up to the Gadget Distributor level, which gets you 100 retail-packaged Gadgets for $4,000.

The Gadget is not a prototype and it’s ready to enter mass production. It’s been in development for six years including reliability and function testing by its inventors, Tom Jones, Todd Green and instructor Craig Douglas.

They’ve shot 300,000 rounds of ammo throughout the testing process and are ready to put into full production. Some of the prototypes have withstood over 50,000 rounds by themselves.

Of course, nothing is completely foolproof and Gadgets can fail, but they’re designed in such a way that if they break or are fouled with dirt or debris, an inner fixed slide plate remains in place and the gun will continue to work even if the safety function of the Gadget is compromised.

The Gadget showcases how flexible and effectively modular Glock pistols have become. If you’re interested in adding a Gadget to one of your Glocks head on over to their Indiegogo campaign to sign up for yours today.