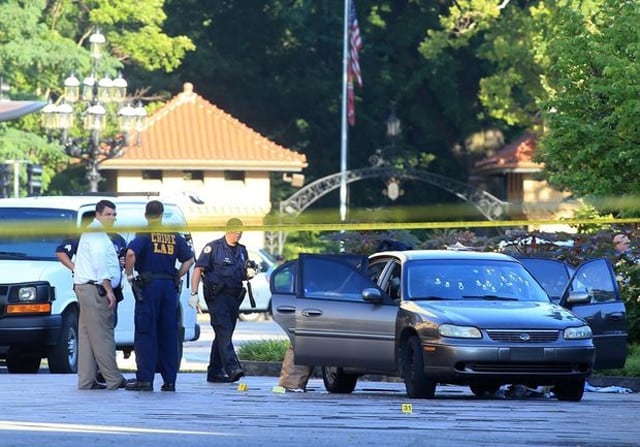 A St. Louis police officer is lucky to be alive after he was shot early Tuesday morning in what is being described as an ambush-style attack.

The 39-year-old police sergeant was working a security job for businesses in the Central West End of the city when the shooting occurred just before 5 a.m. The officer, whose name is not being released, was dressed in full uniform but in his personal vehicle, which was parked in a manner where he could watch several businesses, the St. Louis Post-Dispatch reported.

While sitting in his vehicle, the officer noticed two males walk down the street, but he did not make any sort of contact with them. A short time later, he saw the two men again, only this time they had a third person with them. Again, they walked on and no contact was made.

A little while later, a silver-colored Ford sedan pulled up in front of the officer’s car. Inside were the three men the officer had previously seen, along with a fourth subject. One of the suspects, who had his face covered with a black bandanna, exited the front passenger side of the vehicle and opened fire on the officer, who subsequently returned fire.

Following the gunfire, the suspect’s vehicle left the scene, while the suspect who shot at the officer fled on foot. The officer, who had reason to believe the suspect had been shot, chased him a short distance until he lost him in a parking garage.

The officer’s vehicle was left with at least 14 bullet holes – some from the suspects and some from his own gun. During the exchange, the officer was was struck by a bullet in the torso, but he was wearing a bullet-proof vest, which kept the bullet from penetrating the skin. Nonetheless, the officer was taken to a local hospital where he was treated and released. 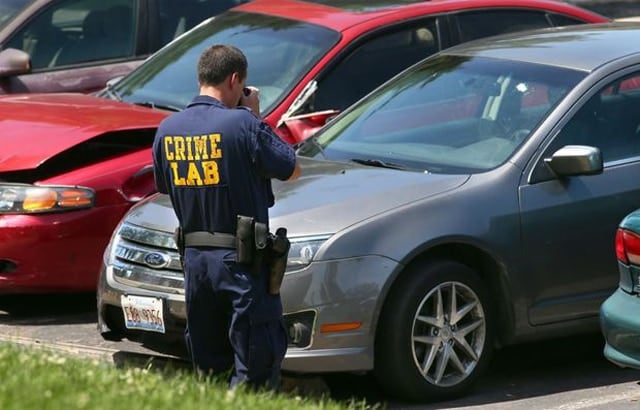 After a man showed up at the hospital with gunshot wounds claiming he had been shot at a nearby apartment complex, authorities found the car believed to have been used by the suspects at the complex. (Photo: Robert Cohen / St. Louis Post-Dispatch)

Some time later, a man showed up at a local hospital with injuries sustained from multiple gunshot wounds. He claimed he was shot at a nearby apartment complex, but an investigation by authorities at the complex yielded the discovery of the vehicle believed to have been used by the suspects during the attack. The injured man is now being questioned.

The suspect’s name has not been released, but he was described as a black male between the ages of 18 and 22.

Police Chief Sam Dotson said the shooting was captured on surveillance video gathered from the neighborhood and that authorities had “substantial leads,” with the shooting having “a high degree of solvability.”

Authorities did not yet release a possible motive.

“They targeted, they ambushed, they tried to assassinate a police officer,” Dotson said, adding there was no effort to rob the officer or anything else of the sort.