A now elderly man who was once known as the “accountant of Auschwitz” was convicted Wednesday of 300,000 counts of accessory to murder.

Despite the massive conviction, however, the Luenburg, Germany, court only sentenced Oskar Groening to four years in prison, but if Groening appeals the decision – at 94-years-old – he will likely never spend a day behind bars.

Although Groening, who would guard the personal belonging brought by the prisoners as they arrived at the camp and collect the money taken from them, never actually murdered anyone, the courts decided his role at the infamous camp from May to June 1944 contributed to the deaths of some 300,000 people.

Groening previously told the court that he requested a transfer after witnessing a fellow guard pick up a baby that had been abandoned with empty luggage and bash it against the side of a truck, killing it, to stop its crying. The transfer was denied and Groening said he then began to drink heavily while working at the camp.

When initially charged, Groening admitted he was morally guilty of the atrocities for which he was accused, but it was up to the courts to decide if he was guilty under criminal law.

“There was a self-denial in me that today I find impossible to explain,” Groening said. “Perhaps it was also the convenience of obedience with which we were brought up, which allowed no contradiction. This indoctrinated obedience prevented registering the daily atrocities as such and rebelling against them.” 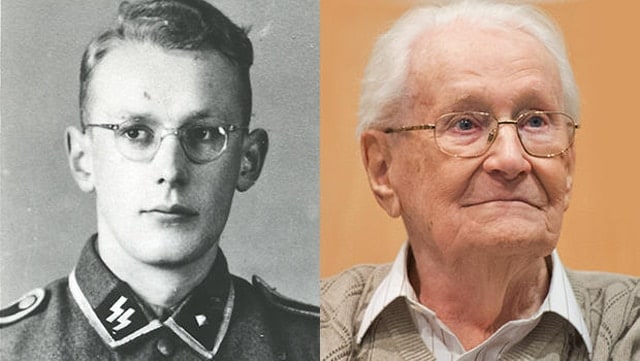