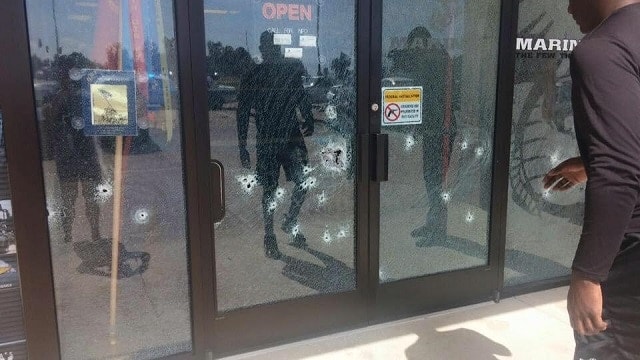 Four U.S. Marines and a Chattanooga police officer were shot as part of an incident that began at the U.S. Navy Recruiting office and ended at the Reserve Center Thursday morning.

Details are sparse in the event but as reported by WRCB, Chattanooga Mayor Andy Berke has confirmed an officer has been shot. City Fire Chief Randy Johnson told CNN that they are investigating an active shooter incident.

“This is a very, very terrible situation and we need to go figure out how we can handle it,” he said.

CBS Evening News tweeted out that four Marines are among the injured.

Nearby hospitals and schools are reporting they are currently in lock down to include Chattanooga State, Erlanger Hospital, Memorial Hospital, Bradley Square Mall and Lee University.

Guns.com will continue to update the situation as it evolves.

Update 12:12 p.m. Local reports are stating that the shooter is deceased and Tennessee emergency managers have requested a no-fly-zone over the city. All Tennessee National Guard centers are on lock down.

Update 12:27 p.m. Information now indicates that the shooting took place at a Navy and Marine Corps recruiting center in a strip mall on Lee Highway then fled the scene in a silver mustang convertible then was shot at a separate location. Agents from the FBI’s Knoxville’s office are on scene. The officer injured was shot in the leg and is listed in stable condition.

Update 12:57 p.m. While some early reports advised the shooting occurred at an Army recruiting station, the U.S. Army Recruiting Command is confirming that all of their personnel are accounted for and safe.

Update 3:55 p.m. Secretary of the Navy Ray Mabus posted the following statement on the shooting in Chattanooga. His office confirms that four U.S. Marines were killed in the attack and the FBI is treating the incident as an act of domestic terrorism.

Today, the Navy and Marine Corps team collectively mourn the loss of four heroes. The tragedy in Chattanooga is both devastating and senseless. On behalf of the entire Department of the Navy family, I offer my deepest condolences to the families of those killed and wounded in service to our nation during this incident.

Throughout history our Sailors and Marines have served overseas, in harm’s way, and the men and women of the Navy and Marine Corps have experienced the deep and lasting pain of combat loss. Today, here at home, we once again feel that pain.

While we expect our Sailors and Marines to go into harm’s way, and they do so without hesitation, an attack at home, in our community, is insidious and unfathomable. As the investigation unfolds, our priority will be to take care of the families of those affected.

I’d like to express my gratitude to the first responders on the scene whose prompt reaction was critical to stopping this individual from inflicting further violence.

Though we can never fully prevent attacks like this, we will continue to investigate, review and guard against future vulnerabilities and do everything in our power to safeguard the security of our service members and their families.

Horrific incident in our community. We will release details as they are confirmed. Prayers to all those affected

UPDATE: Four U.S. Marines and one police officer shot in Chattanooga, TN. No information on their conditions available yet

USAREC confirms shooting in the vicinity of the #Chattanooga East Recruiting Center. All #USAREC personnel are safe and accounted for.