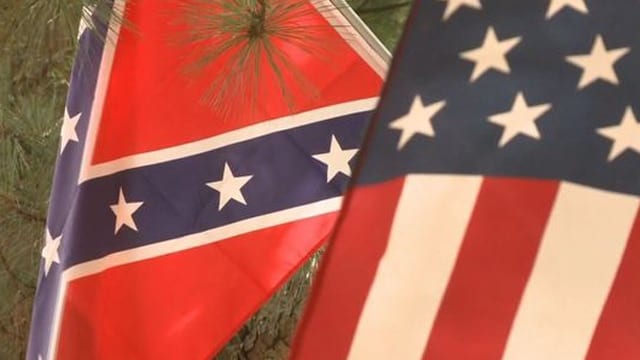 Margaret Ray said she loves her flags, but they’re not worth losing her grandson over. (Photo: 11 Alive)

A grandmother in Austell, Georgia, decided to no longer fly a Confederate flag in her front yard after it was vandalized and days later – after the damaged flag was replaced – a car drove by her house with the occupant pointing a gun at her grandson.

“I love my flags but it’s not worth my grandson getting killed,” Margaret Ray told a local NBC affiliate.

Just last week, Ray was shocked when she and her husband awakened to find someone came onto their property in the middle of the night and shredded a Confederate flag that was hanging on a tree in their yard next to an American flag. Although the flags were hanging right outside the couple’s bedroom window, neither of them ever heard a noise during the night – something which frightened them both.

“It’s scary, I mean you don’t ever know, if they will come out here on my property and tear up my flag, what else are they going to do,” Ray told the same news station last week in an almost eerie foreshadowing of what was to come.

Ray replaced the Confederate flag, but this week while her grandson was mowing the front lawn, he noticed a man drive by the house not once, but twice. According to the grandson, the man was armed and pointed a gun at him.

The boy, who wants to join the military when he’s older, said it scared him to the point that he was unable to breathe until he was back inside his grandmother’s house.

“It’s petrifying,” Ray said. “I mean a man is holding a gun on my grandson. Yeah, the flags aren’t worth it.”

Ray contacted the police, who suggested it might be a good idea for her to remove the flag until the controversy over it settles a bit, but she said not being able to sit in her own front yard watching her own flags sway takes away her freedom.

“It makes me very angry. I mean, seriously, we should have our rights as Americans, but we don’t,” said Ray, who flies the flag as a means to honor her great-grandfather’s service to the country.

“We lost a lot of soldiers over that flag, and I should have the right to fly my flag,” Ray said.

But nonetheless, it won’t fly in her yard. At least not for now.

And apparently a nearby neighbor, who also had Confederate flags mounted in their yard, had their mailbox recently vandalized as well. It’s unknown if the incidents of vandalism are related.