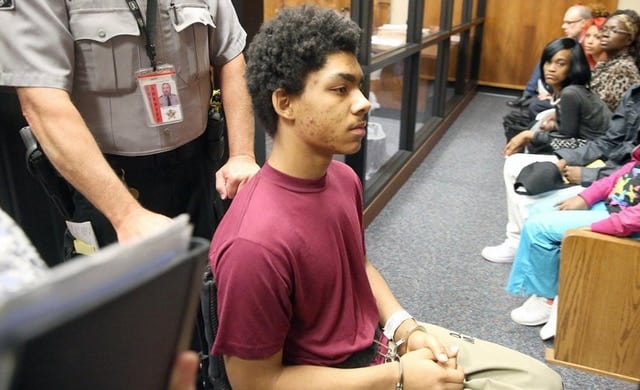 Even though Nathan King is now confined to a wheelchair, Milwaukee County Circuit Judge Thomas McAdams was not confident that he would no longer be a threat to the community. (Photo: John Klein/Journal-Sentinel)

A 16-year-old boy who will likely need the assistance of a wheelchair for the rest of his life was sentenced to 20 years in a Milwaukee County court Thursday for his involvement in multiple violent carjackings last year.

Prosecuting attorney Joy Hammond said Nathan King was involved in at least five separate cases of stolen vehicles, but the sentencing was for two that occurred days apart in June 2014.

King was just 15 years old at the time and armed with a handgun when he approached Claudiare Motley last year. Visiting his home town from North Carolina, Motley just returned from a class reunion when two vehicles pulled up and blocked in his car.

King then got out of one of the vehicles, approached Motley and tapped the barrel of a handgun on the driver’s side window of Motley’s car. King wanted the car, but Motley wouldn’t turn it over.

As Motley attempted to hit the gas and get away, King pulled the trigger, striking Motley in the jaw. Motley survived, but has since undergone a series of numerous surgeries and will likely need more in the future.

Two days later, near the same location, King again attempted to steal a car, only this time the incident unfolded a bit different. King and an accomplice approached Victoria Davison-Adams as she sat in her car outside of her home and told her they wanted “the keys, car, everything.”

Like Motley, Davison-Adams refused, but what King and his accomplice didn’t know was tucked away in her gym bag in the front seat of her car she had a legally concealed firearm, which she reached for and aimed at the teens.

Davison-Adams squeezed the trigger, striking King in his left side. According to her account, King’s accomplice said a curse word, looked at his friend then ran away, leaving King lying on the ground bleeding.

The shooting left King paralyzed, and his involvement in numerous carjackings around the city left him with a steep penalty requiring him to serve at least 12 and a half of the 20 year sentence behind bars and the remainder in the community under state supervision, the Journal-Sentinel reported.

King, who was tried as an adult after he went missing on two separate occasions, pleaded guilty in April to the two charges of armed robbery which stemmed from the incidents involving Motley and Davison-Adams, both of whom testified in court. Additional charges for first-degree reckless injury and taking and driving a vehicle without consent were dismissed.

Even though King now requires a wheelchair, Milwaukee County Circuit Judge Thomas McAdams, appeared reluctant that it would deter what he called disturbing behavior.

“I can’t say the community is safe from you because you are in that chair this morning, Mr. King,” said McAdams, who added that residents have grown tired of the gun violence, carjackings and violent crimes being carried out by young people in the area.

But King’s mother, Regina Ragland, pleaded with the court to go easy on her son, who she said just started to hang out with a bad crowd. Ragland said she has seen young people go into the system only to come out worse.

Additionally, King, who said he wanted to finish school and get a job, apologized for his actions in a letter to the judge, and said he wanted to talk with other kids to let them know “stealing cars and being in the streets isn’t cool at all.”

Ironically, Motley, who seemed upset after the sentencing, also asked for mercy for the teen and said he hopes King understands that he can do better.

However, Davison-Adams wasn’t so sympathetic towards the teen.

“Nathan King took away my peace, my joy and my sense of safety,” she said. “Everyone is questionable to me.”

And when asked about shooting King, Davison-Adams said she would do it again.