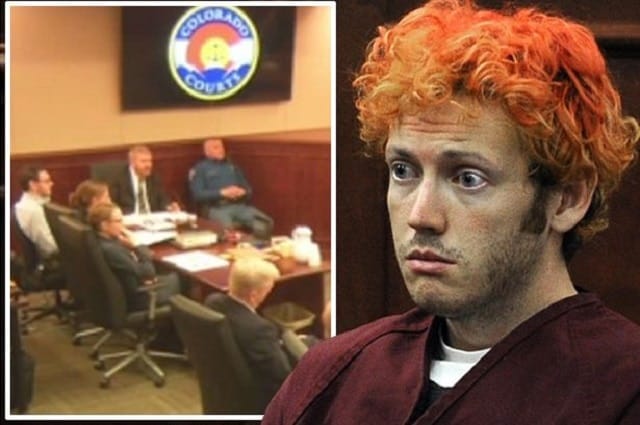 James Holmes, the killer who attacked a midnight showing of a Batman film in 2012, now faces sentencing. (Photo: AP Composite)

After more than 12 hours of deliberation, a Colorado jury found James Holmes guilty on all counts Thursday, sending his trial into a decision on sentencing.

Holmes, on trial since April for the mass killing that left 12 people dead and 70 others wounded almost three years ago, had pleaded not guilty by reason of insanity but never denied his actions in the July 2012 shooting. Nevertheless, more than 200 witnesses called by prosecutors carried the jury to its decision.

“That guy was sane beyond a reasonable doubt, and he needs to be held accountable for what he did,” Arapahoe County District Attorney George Brauchler said.

The defendant showed no reaction as he stood with his hands in his pockets while the jury findings were read.

Born in California, Holmes obtained a degree in Neuroscience there before moving to Denver to attend a Ph.D. program at the University of Colorado. Depicted as unsocial by those who knew him, friends often noted his strange actions and he sought mental health treatment.

Court documents and testimony detailed a several weeks long process that Holmes undertook to plan and meticulously map out his crime, going so far as to purchase his midnight ticket for The Dark Knight Rises film premier 12 days in advance.

Further, he planned to blow up his apartment to draw police away from the attack, although the homemade explosives and napalm made from gasoline and Styrofoam cups was later disarmed without incident.

Survivors and public outpouring via social media greeted the news of the Holmes verdict with satisfaction.

“I felt so much relief. I just felt closure,” Jansen Young, whose 26-year-old boyfriend Jonathan Blunk was killed in the theater, told reporters. Young said she was pushing for Holmes to get the death penalty.

The same jury of nine women and three men will now proceed to the sentencing phase, which is likely to take about a month. Prosecutors are seeking  capital punishment.

In an open letter penned by Holmes’s parents last December, they decried the potential death of their son.

“We do not know how many victims of the theater shooting would like to see our son killed. But we are aware of peoples’ sentiments. We have read postings on the Internet that have likened him to a monster. He is not a monster. He is a human being gripped by a severe mental illness. We believe that the death penalty is morally wrong, especially when the condemned is mentally ill,” reads the letter in part.

Survivors’ families, in association with the Brady Campaign, brought a lawsuit against online retailers who sold Holmes the ammunition and gear used in the attack. The suit was dismissed and the Brady group chastised by the judge in the case for using the court to publicize its political agenda.

Brady President Dan Gross released a statement Thursday on the Holmes verdict while standing by their civil suit, saying, “It is unacceptable that it was so easy for this killer to obtain the arsenal he used to destroy so many lives. We can do better than this.”