CAN’T is a four-letter word: Inspiration from 'disabled' shooters 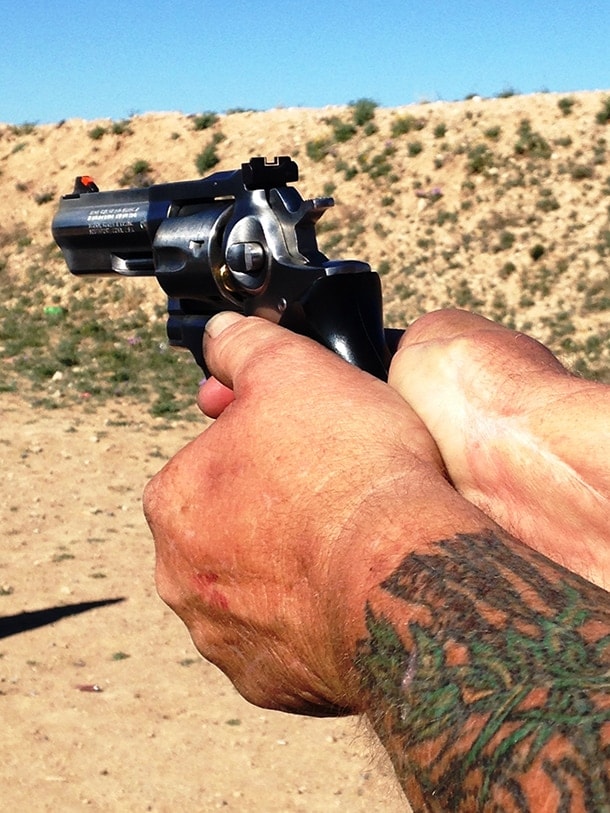 Carl grips a handgun firmly and safely despite a missing thumb on his shooting hand. (Photo: Team HB)

“Everyone has a disability of some sort,” an instructor said to a class of other shooting instructors.  His comment was strident and true. Unless you’re that one-in-a-million human who’s survived to the age you are now, entirely free of physical injuries or abnormalities and enjoying robust health, confidence and fitness, you can name your own disabilities, right now.

Maybe your challenges are visible to others, maybe not, but chances are at some point, you’ve had to work around your own physical or psychological barrier to become a better shooter.

As a firearms instructor, one of the primary challenges I face is the student who quickly decides they “can’t” do something after a brief trial.  The skills of gun safety and marksmanship are really quite simple.  Wrapping those skills around a human interface with less than optimal—pick one—eye dominance, strength, surgical history, size, deformities, and even social support, is the real challenge of shooting.  It’s my job to help folks get around those obstacles.  It’s my joy to witness the moment when a person defeats whatever barrier they carried onto the range.  It’s enlightening to interact with those who settled that score before getting there.  Let’s meet a few of them: 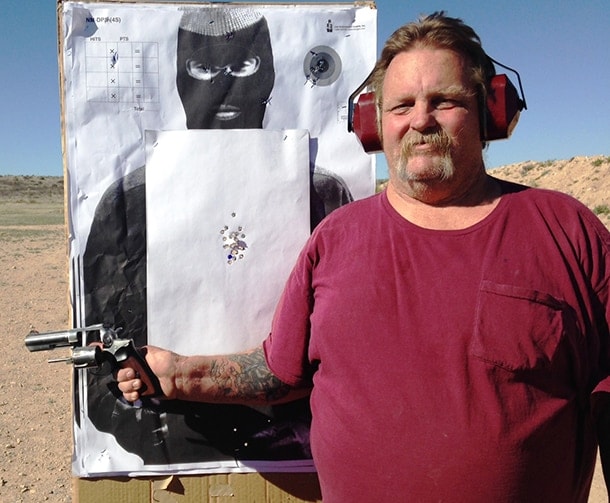 Carl attended concealed carry class and stated he needed to borrow a handgun for his shooting test.  In our home state of New Mexico, permits are granted by action type and caliber—and he asked to borrow the biggest we had available.

It was hard not to raise an eyebrow, as he’d previously said he was a right-handed shooter and Carl has a noticeably absent right thumb.  I asked how he grips a handgun; “with my fingers” was the obvious answer.  He backed this statement up by taking my hand and putting it in a veritable death grip, and followed that up with a story.

“When I went for my first CDL (commercial drivers’ license) renewal after I lost the thumb, the nurse said, ‘we can’t renew you without a thumb, you can’t grip the steering wheel.’ I took her hand too and showed her I could—I can hold onto that wheel better than most people. She signed off on my exam.”

I was convinced of Carl’s strength, but still wondered how he’d do on the range.  Needless to say, I shouldn’t have worried.  He handled a Glock 30, a compact and snappy .45 ACP, with ease and incredible accuracy.  Likewise with a full-size Ruger .357 revolver.  It’s impressive to see him perform reloads with relative ease, having worked out his own way of doing them safely.  Carl was pleased to have his photo taken with his excellent revolver shot group, and I wish I’d also taken a picture of the one he made with the G30, as it was even better. 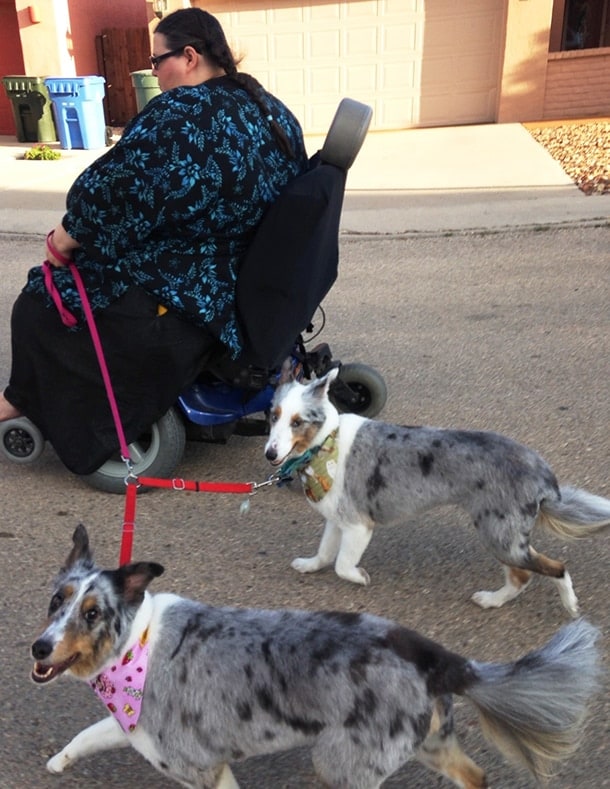 Tarrant has prepared many ways to defend herself, including her dogs. (Photo: Team HB)

Tarrant is a retired emergency dispatcher who uses a wheelchair for mobility.  She’s handy and accurate with an AR15 as well as being a concealed carry licensee.  In the time I’ve known her, Tarrant has shared a lot of stereotype-busting facts about people with mobility issues.  The first was when she demonstrated that her chair can move from 0 to 15 mph in very short order.  “People don’t expect to be charged by a chair,” she said, “but this thing can easily charge someone and knock them down.”  She’s also spent time discussing the multitude of locations she can stow handguns on the chair—several offering a very fast presentation. She’s also demonstrated carrying a long gun around the range with ease.

Tarrant has given a lot of thought to overcoming the disadvantage of decreased mobility with the equalizing force of not only firearms, but other tools like the chair itself.  It’s a reminder to all of us that any object can be a weapon when wielded as such.  The usual subsequent gun control discussion can be put aside for the moment, as most Guns.com readers understand the implications.

Gator endured and overcame injuries that would’ve ended most people’s interest in shooting.  This experienced oilfield worker endured the crushing blow of a 150-pound hunk of steel landing on the lowest joint of his right thumb, mercilessly crushing and tearing bone and soft tissue. 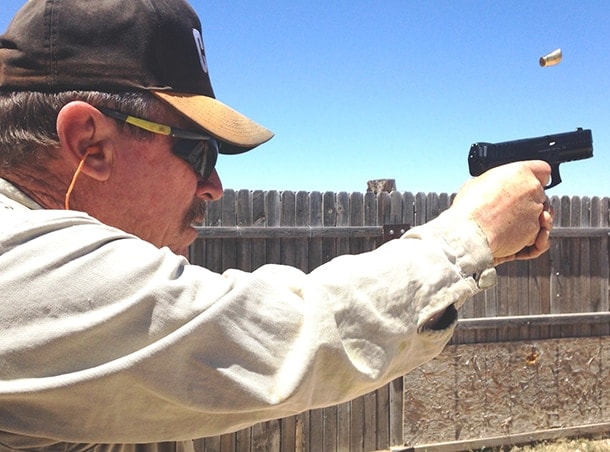 Gator has made himself competent with right…

Due to his remote location at the time, he had to wait nearly a day before receiving any medical attention.  Within two weeks of this injury, extensive hand and wrist surgery was done to pin and sew together what was left. A few weeks after that, Gator showed up on a windy, cold, and altogether miserable January day to engage in an all-day carbine course that included transitions to handgun.  He’s a right-handed shooter, normally.

On that day, I watched him, my peer in this class, work out the challenges his new condition presented—he shot carbine right-handed, finished a course of fire wincing with pain, and then shot left-handed after break.

The same process transpired with his sidearm until, at day’s end, his sling and holster had been moved or jury-rigged, and a couple items had been borrowed, to make left-handed shooting easier.  Also by day’s end, his hand and forearm were red, very swollen, and would’ve earned a scolding from his surgeon had he laid eyes on Gator’s overuse of the recovering hand.  But Gator was smiling with pride at his new southpaw skills, his only complaint was needing more practice shooting left-handed. 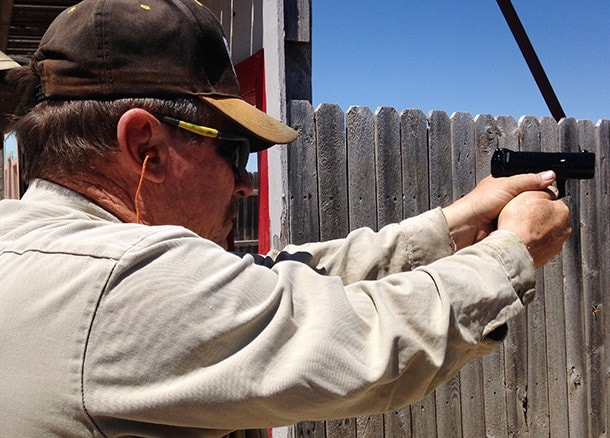 Nowadays, Gator’s hand is pretty well healed and he’s also endured shoulder surgery.  He’s outfitted himself with new pistol holsters, and moves easily from right- to left-handed shooting and back again as his comfort level dictates.  He’s the definition of what cowboys here in the west call “a double-tough son of a gun.”

A deeper look at what drives these shooters to keep up their skills despite substantial obstacles and pain reveals lessons for all of us:

Carl says, matter-of-factly, he is a truck driver and a shooter and there’s nothing that’s going to stand in the way of that.  He’s obviously worked on his hand strength to overcome the dexterity that left him along with his thumb—but maybe that’s not a fair assessment as he can reload almost as fast as any shooter.

Tarrant says that she’s not going to buy into the myth that someone will be there to rescue her in the event a criminal attack happens, whether at home or out and about.  She’s taken the wise and holistic approach of seeing objects other than firearms as weapons to be used in a time of need.

Gator says he can envision a day when shooting for self-defense or food may be key to survival.  He realizes shooting is a perishable skill that must be constantly honed.  When asked why he doesn’t just give up, having every excuse to say it’s too painful or against doctor’s orders, he replied, “giving up isn’t the American way, and that’s not what I do.”

By the way, these folks wanted their real names used here (yes, Gator’s name is real).  It’s another testament to their outlook on life.  Their physical challenges are very different, but their attitudes have much in common.

What’s in it for you?

The next time you go to the range and find yourself struggling with some limitation, I personally challenge you to eliminate that statement I can’t, and make it into a question: what can I do? Not only will it release some of the stress associated with whatever challenge follows you to the range, it’ll open your imagination to find creative solutions. Please, just be safe while trying new things and forming new habits.
A wise teacher said, “if you argue for your limitations, you get to keep them.” The Americans in this article have obviously found ways around, through and over theirs.  Be the next source of inspiration—tell us in the comments how you overcame your shooting challenge.