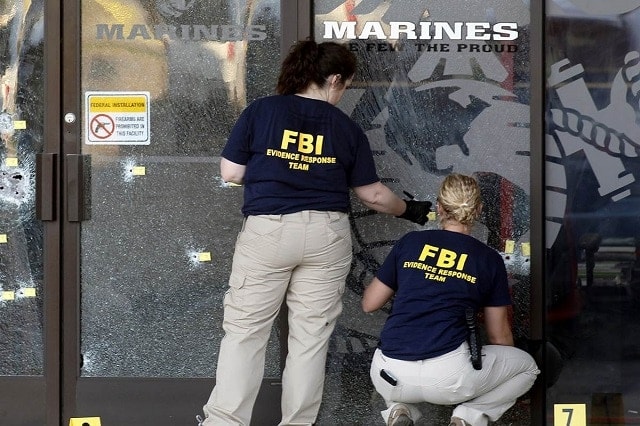 Groups to include Everytown, Moms Demand Action, and the Brady Campaign are calling for new gun restrictions after a terrorist’s assault on two military installations. (Photo: AP)

Within hours of the mass killing that claimed the lives of four U.S. Marines in what authorities are classifying as domestic terrorism, gun violence groups issued statements calling for action.

Thursday morning’s attack on two military installations that left five dead at the Navy Operational Support Center and Marine Corps Reserve Center in Chattanooga — including the suspected shooter — and three injured is still under investigation, but several organizations are already blaming the gun.

“As the details continue to unfold in Tennessee, it is already clear that this is another reminder of the work that needs to be done to keep guns out of the hands of dangerous people,” reads a statement issued by the Brady Campaign to Prevent Gun Violence five hours after the first news of the event broke.

Those sentiments were echoed in remarks made by Capt. Mark Kelly, the co-founder of Americans for Responsible Solutions along with his wife, former U.S. Rep Gabrielle Giffords, and of former New York Mayor Michael Bloomberg’s Everytown, Mayors Against Illegal Guns and Moms Demand Action coalition.

“This horrific shooting should be a call to action to strengthen our gun laws,” said Ron Littlefield, former Chattanooga Mayor and member of Mayors Against Illegal Guns in a statement.

However, in none of the statements seeking increased laws were explanations of how Thursday’s shooting would have been prevented or mitigated by measures backed by any of the groups.

This may largely be because information on how the killer obtained his firearm is currently not available.

What is known about the suspect, Muhammad Youssef Abdulazeez, is that he was a naturalized U.S. citizen brought to the country as an infant from Kuwait with a middle class background that included graduating from high school in Red Bank, Tennessee, and the University of Tennessee at Chattanooga with an engineering degree. While according to reports, his father was investigated by the FBI several years ago and put on the terrorism watch list, he was later removed.

Information obtained thus far cite Abdulazeez had a marginal criminal record, stopped once for speeding and a second time this April for a DUI charge which he was set to appear in court for at the end of the month. This on the outset would not appear to deem the 24 year old a prohibited firearms possessor as the maximum punishment allowed by state law for first time DUI offenders is 11 months.

Nevertheless, gun control advocates are taking the early opportunity to ask that more be done.

“Tennesseans must stand up and demand more from elected leaders to prevent the gun violence that kills 88 Americans and injures hundreds more every single day,” said Linda McFadyen-Ketchum, of the Tennessee chapter of Moms Demand Action.

According to the most recent FBI crime statics, those for 2013, the nation saw 8,454 homicides by firearm, or about 23 per day, a figure that has declined each year since at least 2009 despite a growing population.