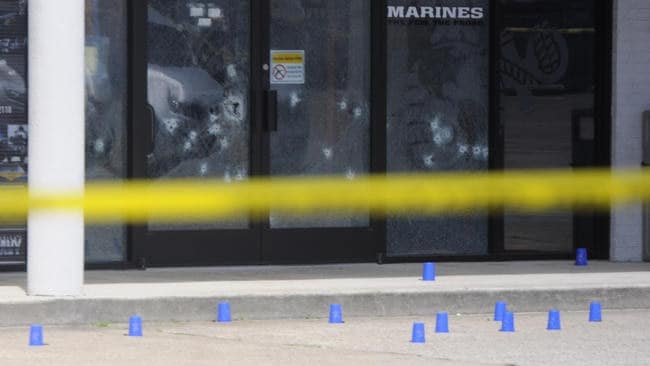 “Watching the coverage on television Thursday, it was hard to ignore the gun-free zone sign on the front door of the recruiting station. It was surrounded by bullet holes,” says economist Dr. John Lott in his column with Fox News.

“Army regulations are very clear stating that personnel cannot have firearms during their official duties. Last year the Obama administration instituted interim rules that clearly prohibit privately owned weapons from all federally leased office and land, including recruiters’ offices,” says Lott, who published the study “More Guns, Less Crime,” which argues that the influx of firearm ownership contributed to the decrease in overall crime across the U.S.

He adds, “We trust soldiers to carry guns all the time when they are stationed in Iraq or Afghanistan, but somehow when they come home we no longer trust them.”

Four U.S. Marines and a Chattanooga police officer were killed as part of an incident that began at the U.S. Navy Recruiting office and ended at the Reserve Center Thursday morning.

According to authorities investigating the incident, the gunman opened fire at the recruiting station from inside his car. When police arrived, he fled and led them on a high-speed chase to another military installation where he opened fire again.

In addition to the “More Guns, Less Crime” study, Lott’s Crime Prevention Research Center issued a report Wednesday showing the number of carry permit holders in the country is at an all-time high with a whopping 12.8 million.

Within hours of the incident that authorities are classifying as domestic terrorism, anti-gun violence groups also issued comments on the incident, which are critical of weak gun laws.

“As the details continue to unfold in Tennessee, it is already clear that this is another reminder of the work that needs to be done to keep guns out of the hands of dangerous people,” reads a statement issued by the Brady Campaign to Prevent Gun Violence five hours after the first news of the event broke.

Those sentiments were echoed in remarks made by Capt. Mark Kelly, the co-founder of Americans for Responsible Solutions along with his wife, former U.S. Rep Gabrielle Giffords, and of former New York Mayor Michael Bloomberg’s Everytown, Mayors Against Illegal Guns and Moms Demand Action coalition.

Despite having information on how the killer obtained his firearm, which is not yet available, the groups said stricter measures could have prevented the shooting.