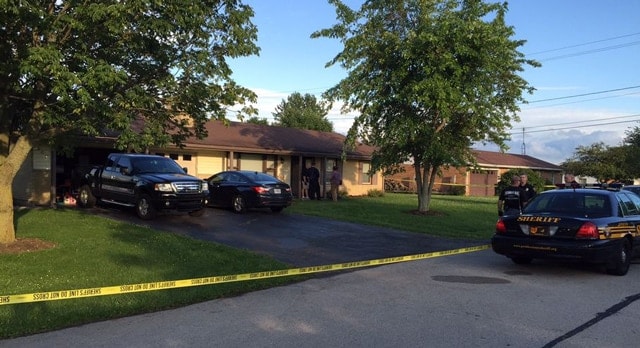 The incident remains under investigation, but it appears to have been an attempted robbery and a random act. (Photo: Jarod Thrush / WHIO)

A 22-year-old man is dead after he barged into a family’s home in the small town of Eldorado, Ohio, last week while armed with a handgun in what appeared to be an attempted robbery.

The homeowner’s children were apparently playing outside around 6:30 p.m. July 10 when their 3-year-old child came running into the house and said, “A robber’s here, daddy,” WHIO reported. Moments later, a man who was armed with a handgun, wearing a hat and had his face covered with a bandanna, came through the front door.

The homeowner’s wife told the 911 dispatcher that after bursting through the front door, the intruder shouted an obscenity before her husband shot him a single time in the chest.

When authorities arrived, they found the suspect just inside the front door suffering from a gunshot wound to the torso. He was transported to a local hospital via medflight and soon thereafter died. The suspect was later identified as 22-year-old Jacob Craft of nearby Eaton.

Authorities recovered two guns from the scene – presumably one belonging to Craft and the other belonging to the homeowner – but failed to reveal their caliber. Authorities also found what appeared to be the suspect’s car parked on the street in front of the home.

The wife said they were not acquainted with Craft, and Preble County Sheriff Mike Simpson confirmed that it appeared to be an isolated incident and the community was not in any danger.

The family, which included the parents and two children, were not harmed during the home invasion.

The incident is still under investigation, but Simpson said reviewing the currently known facts, it appears the homeowner acted in self-defense and his actions were likely justified.

Simpson also said the residents are cooperating fully with the investigation.