NSSF: Fix NICS, but not the ‘Charleston loophole’ 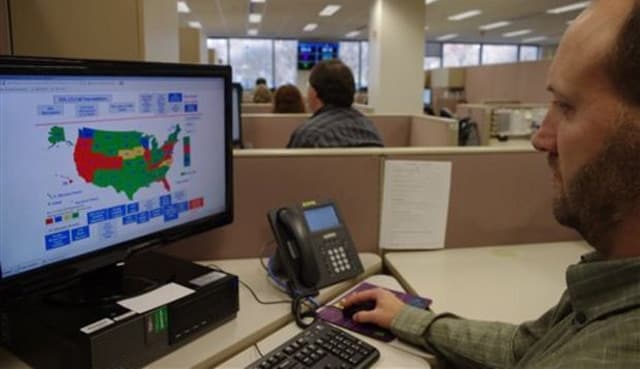 A researcher simulates a NICS check at the FBI’s criminal justice center in Bridgeport, West Virginia, on Nov. 18, 2014. NICS did about 58,000 checks on a typical day in 2013. (Photo: Matt Stroud/Associated Press)

In the wake of the church shooting in Charleston, South Carolina, that resulted in nine people dead, the public learned that the shooter was able to legally obtain a firearm due to a clerical error by the federal agency tasked with processing background checks and before the error could be realized the mandated three-day waiting period had elapsed so the gun dealer was able to complete the sale.

Some members of Congress have proposed trying close what they’re calling the “Charleston Loophole” by extending the wait period indefinitely until a background check is completed. The National Shooting Sports Foundation, the lobbyist group representing gun makers and sellers, said it agrees that the National Instant Criminal Background Check System needs to be fixed, but not the way lawmakers are suggesting.

“Anti-gun advocates are choosing to fault the three-day rule, suggesting that the examiner did not have enough time to finish the background check. But it’s clear that whether the FBI had three days or two months, they were not able to get the right answers because they were asking the wrong people,” wrote Larry Keane, the NSSF’s senior vice president and general counsel.

As the Federal Bureau of Investigation explained on July 10, when the shooter, Dylann Roof, was arrested in March he admitted to officers of illegal drug use, which would have disqualified him from buying a gun.

When Roof tried to buy a gun a month later, his criminal history was flagged, but because personnel with the FBI tried to verify the detail with the wrong local law enforcement agency, they could not positively confirm the arrest. Per federal law, if the check is not completed within three days, the licensed dealer can either proceed with the sale or cancel it.

However, not all retailers finalize gun sales without a completed background check. Some big box retailers like Wal-Mart make it company policy to deny a sale despite legal approval.

“This mistake does not call for changes to the statute, but instead improving our current system,” he wrote and added mention of the NSSF’s longrunning campaign to improve the background check system.

The NSSF’s FixNICS project aims to set a standard for inputting and processing data in the system already in use.

“Effective background checks on prospective firearm purchasers depend on the submission of complete, accurate information in the NICS database, and adequate training of those responsible for entering data,” Keane wrote.

Although it’s unclear what lawmakers will do to tighten the NICS database, but in the not-too-distant future the FBI has plans to modernize the system by updating its electronic backend with improved user and search functionality.