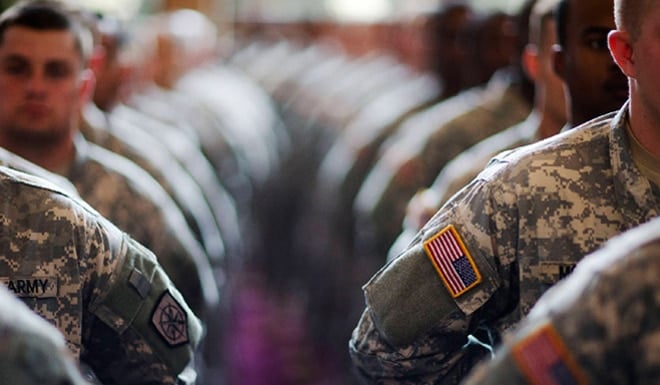 Military installations in at least six states across the country will not longer be gun-free zones. (Photo: Associated Press)

Governors in at least half a dozen states announced over the weekend that their military personnel will no longer be unarmed. The landmark decision came following a terrorist attack at a recruiting center and reserve station in Chattanooga, Tennessee, Thursday that left five servicemen dead.

Indiana, Florida, Texas, Louisiana, Arkansas and Oklahoma are among the states that will soon allow National Guardsmen and other military personnel to carry guns at military facilities, the Associated Press reported.

“As commander-in-chief of the Indiana National Guard, I will not permit our citizen-soldiers to remain unable to defend themselves and our citizens at facilities in our state,” Indiana Gov. Mike Pence said in a statement Saturday. “Hoosiers may be assured that those who have stepped forward to defend our state and nation will have the ability to defend themselves.”

As part of Gov. Pence’s plan to increase security, an executive order issued Saturday gave authority for National Guard personnel at all recruiting offices and state military facilities to be armed. The governor also ordered the state adjutant general to reevaluate security at these facilities.

Florida Gov. Rick Scott said in a recent interview with CNN that it must be understood there are those in the country which mean to harm our military.

“They need to be safe and they need to be armed,” he said, referring to military personnel, and Saturday he issued an executive order to arm the state’s guardsmen.

Gov. Scott also called for improvements in security at recruitment centers, as well as collaboration with local law enforcement to conduct regular security checks. Scott ordered the evaluation and necessary upgrades on security at recruitment offices, including bullet-proof glass on storefront facilities and video surveillance. But while such changes are being made, the governor also called for all six storefront recruitment offices to be relocated to National Guard Armories.

“It has become clear that our military personnel must have the ability to defend themselves against these type of attacks,” Texas Gov. Greg Abbott said in a statement after issuing an executive order Saturday.

“Arming the National Guard at these bases will not only serve as a deterrent to anyone wishing to do harm to our service men and women, but will enable them to protect those living and working on the base,” Gov. Abbott added.

“Our hearts break at the news of another senseless act of violence and terror, this time out of Chattanooga. Our prayers go out to all the families of the victims, especially the family of Staff Sgt. David Wyatt of Russellville, one of Arkansas’s own,” Arkansas Gov. Asa Hutchinson said in a statement.

“I want to join in those who are calling for greater security at our recruiting stations and military installations. We’ve had numerous instances of attacks. Clearly they are a target, and for us to have unarmed military personnel makes no sense, which is why I am directing Major General Mark Berry to arm full-time personnel as he deems necessary at military installations,” Gov. Hutchinson concluded after issuing an executive order Friday.

In response to what she called a “cowardly attack,” Oklahoma Gov. Mary Falling authorized Maj. Gen. Robbie Asher to arm Guardsmen with whatever weapons he deems necessary for the security of the military facilities and protection of those within.