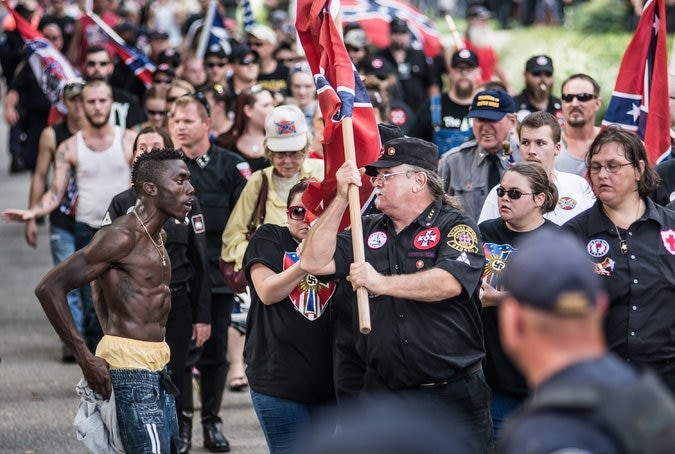 A man confronted members of the Ku Klux Klan on Saturday as they protested the removal of the Confederate battle flag from the grounds of the State House. (Photo: New York Times)

Members of the New Black Panther Party and the Ku Klux Klan squared off during protests that remained mostly in line, despite occasional scuffles among the crowd of some 2,000 people, the New York Times reported.

“This is my country,” a protester yelled at a group of black people. “My ancestors founded this country!”

The white protesters were reportedly outnumbered and at one point during their departure had to be escorted by police. The Times reported that one car transporting white supremacists crashed into a light pole attempting to escape black protestors pursuing it.

Gov. Nikki Haley on Friday called for peace ahead of the planned KKK protest, saying South Carolinians should ignore the “disruptive, hateful spectacle.”

“We want to make the Statehouse a lonely place for them. In doing so, we’ll honor those we have lost and continue to make our state stronger.”

The last KKK rally on the state Capitol grounds was held in 1988, Columbia newspaper The State reported.

A point of contention in the South for years, the Confederate flag was again thrust into the spotlight after a white gunman with white supremacist leanings shot and killed nine black parishioners during an evening Bible study at the Emanuel African Methodist Episcopal Church on June 17.

Along with being credited with writing a racist manifesto, the alleged shooter was also seen in photographs with the Confederate battle flag.