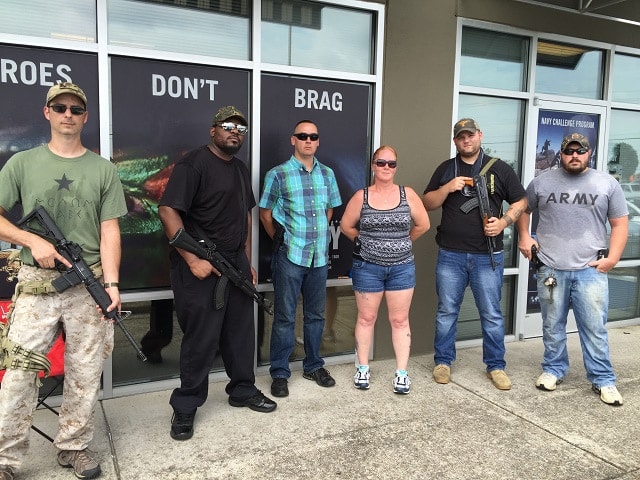 Following an attack at a recruiting center and reserve station in Chattanooga, Tennessee, last week that left five people dead, residents across the country are taking it upon themselves to do what they can to protect the servicemen and women working at these facilities.

Although federal law prohibits the carrying of firearms on military installations and state facilities, at least half a dozen governors issued executive orders over the weekend authorizing select members of their state National Guard to carry weapons as a means of protection for themselves and others working at the facilities. But some citizens simply aren’t waiting for those orders to take effect before taking action.

When Crystal Tewellow organized a watch at a recruiting office in Hiram, Georgia, a day after the attack, about 30 people answered the call, with more participating each day.

Tewellow said they are trying to have at least one person stand outside the center at all times during business hours.

In Winchester, Virginia, a single man armed with an AR-15 stood outside of a recruitment center from morning to evening the day after the attack. 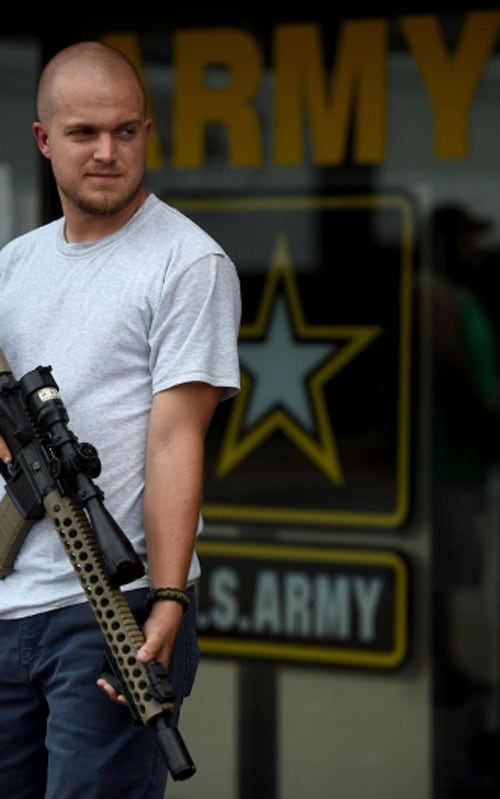 A volunteer who did not wish to be identified stands watch in front of a Huntsville, Alabama, Army recruitment center. (Photo: Alabama.com)

The man said he’s been met with positive reinforcement from not only those working at the facilities, but their wives as well, some of who even baked him cookies and brought him lunch.

Rob O’Donnell is a retired New York City Police officer who is standing guard outside of a recruitment center in Scranton, Pennsylvania. He said it’s not a move made to scare anyone or prove a point, but rather just a means of providing a sense of security.

“I’ve had a lot of people walk by and give me the thumbs up, you know, they don’t ask why I’m here, but they kind of know deep inside,” O’Donnell said in an interview with local media.

Jeff Roy of Ashburnham, Massachusett, and Chris Rietmann of Alstead, New Hampshire, are Army veterans and members of the group known as “Oath Keepers.” The men – heavily armed – traveled to Keene, New Hampshire, to watch over a recruitment center there, local news radio station WKBK reported.

A group of volunteers rotated shifts outside of a Huntsville, Alabama, recruiting station Monday. The volunteers said it’s not only an honor, but a privilege to protect those who protect us.

Stone added that their presence is not meant to be a political statement, but simply making sure the men and women are protected until changes are made to ensure they can protect themselves.

And the Huntsville volunteers have been well-received. Local law enforcement, firefighters, veterans and local residents have all come by to show their support. Additionally, residents have brought food and water for the volunteers as they stood outside in the heat and a local Papa John’s even sent over free pizzas.

In Flint Township, Michigan, about half a dozen armed citizens could be seen outside of the Armed Forces Career Center, a local ABC affiliate reported. Volunteer Matt Krol said some of the volunteers are vets, but they’re all citizens and patriots who love their country and their troops.

“So we’re out here to make sure they remain safe,” Krol said. 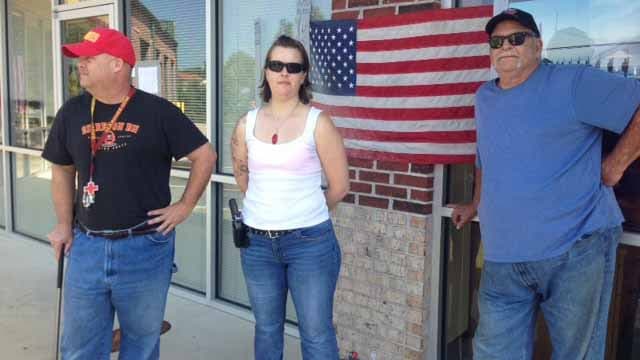 Crystal Tewellow (center), who organized the watch group the day after the Chattanooga shooting, stands with fellow volunteers outside of a recruitment center in Hiram, Georgia. (Photo: Fox)

Volunteer Jerry Katich, who is also a veteran, said they are protecting the men and women who protect us, while hoping change will come so they may protect themselves.

Some of the Flint Township volunteers also said they plan to go to other areas to stand watch as well.

In Muphreesboro, Tennessee, about 100 miles from last week’s deadly attack, half a dozen people stood guard outside a recruiting center. Matt Woodard, one of the volunteers, told local radio station WGNS that it was an honor to protect those inside.

One man, armed with a .22-caliber rifle and a .380-caliber Smith & Wesson was outside of a Prairie Township, Ohio, recruitment center Monday.

“I can’t see why any red-blooded American wouldn’t want to be out here,” Larry Fitzpatrick told The Columbus Dispatch. “Our troops go overseas and fight to protect us and then they can come home and get butchered on our U.S. soil? That’s unacceptable. So until these places get their own protection, I’ll be it for them.”

Fitzpatrick said he’s had several people stop and thank him for what he’s doing and some have even brought him snacks and drinks.

There were also reports of volunteers guarding recruitment centers in Lancaster, Westerville and a few other cities in central Ohio. In Wooster, several off-duty sheriff’s deputies were volunteering their time to protect the recruitment center there as well.