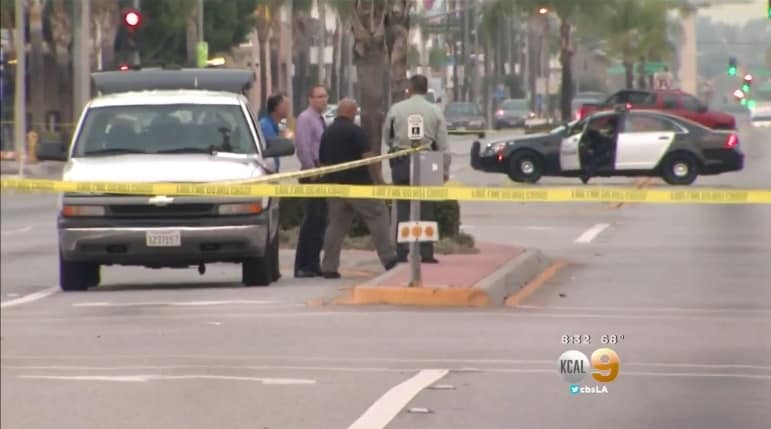 During the initial investigation, which lasted into the morning daylight hours, several streets were blocked off close to where the robbery occurred. (Photo: CBS Los Angeles)

An attempted robbery of a Montebello, California, business owner early Saturday morning resulted in a shootout that left the intended target wounded and the two suspects dead.

The robbery occurred just after midnight outside of the man’s business, which was already closed for the night. According to Lt. Andy Vuncanon with the Montebello Police Department, the two suspects, who were both armed with handguns, approached the victim on the street and announced a robbery.

A local CBS affiliate reported that despite the fact the suspects collected the man’s watch and wallet, at some point, for an unknown reason, one of the suspects still fired several shots at the victim, striking him a single time in the stomach.

However, unbeknown to the suspects, the victim was also armed with a handgun and was able to return fire. Both suspects were shot and attempted to flee the scene, but did not get far.

Officers responded to reports of a robbery and shots fired, and when they arrived, they found one suspect about a block from where the robbery occurred and the second suspect a short distance away. Both suspects were pronounced dead on the scene and were later identified by the county coroner as Kevin Fierro, 23, of Los Angeles, and Roger Soriano, 21, whose residence is unknown.

The victim, whose name was not released due to safety concerns, was transported to the hospital for treatment of the gunshot wound he sustained during the robbery. His condition was not immediately know, but Vuncanon said he believed the man’s injuries were not considered life-threatening.

Police recovered two handguns from the scene, presumably belonging to the suspects. They also recovered the victim’s wallet and watch which were taken during the robbery.