Decomposing man found along with 1200 guns, 2 tons of ammo 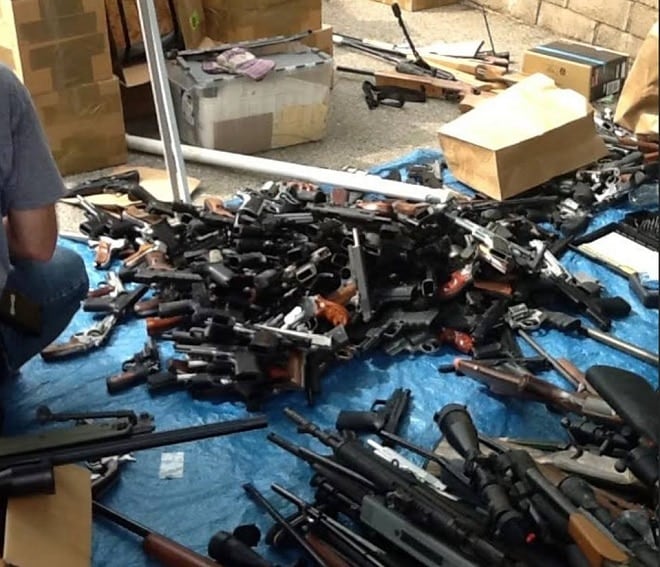 It took several trips for the LAPD to remove the collection of a deceased gun owner last weekend. (Photo: Palisades News)

Police in California had to call in trucks to remove stacks of firearms and ammunition of all kinds from a condo after a woman found her boyfriend long dead in his car.

The discovery of the collection in the 1700 block of Palisades Drive in the Palisades Highlands development of Los Angeles last Sunday was prompted after the owner, who has not been identified, was found dead and homicide detectives responded. The man had been in his car approximately two weeks as reported by the New York Daily News.

While police state there was no foul play believed involved, the late man’s estimated 1,200 guns, many still new in the box with tags still attached, were impounded by authorities on the pretense of vetting if any were used in the commission of a crime. An estimated two tons of ammunition was also recovered.

“Our truck couldn’t carry it all,” Smith told the Los Angeles Times. “We had to go back and make another trip.”

An image reportedly taken at the scene shows a pile of high-end handguns to include Glocks, Sig Sauers, and various 1911s as well as Smith and Wesson revolvers with presentation grips. Both semi-auto and bolt action rifles, some heavy benchrest guns with optics and bipods, litter the floor among stacks of unopened boxes.

Smith further advised there were no indications the man was involved in arms trafficking or smuggling, or that he had a criminal motive behind his collection, while the Palisades News describes both the man and his girlfriend as “a hoarding couple.”

Smith labeled the recovery of the guns, which reportedly required the bomb squad and hazmat trucks, as precautionary.

“It’s not a crime to have a large number of weapons so long as they were legal to own and legally obtained,” Smith said “We want to make sure that’s the case.”