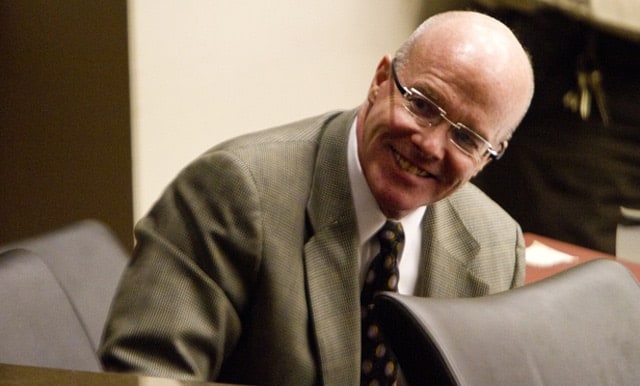 A former attorney for the popular Austrian pistol maker Glock has accused the company of orchestrating the narrative that ultimately landed him in prison, according to a complaint filed in a Georgia federal court this month.

The Georgia-based subsidiary Glock, Inc. used its wealth, power and influence to convince local prosecutors to pursue charges against employees who could shed light on the company’s corruption, Glock’s former general counsel Paul Jannuzzo alleges in the lawsuit.

The suit names Glock, its shell company Consultinvest, Inc., and their private legal counsel Robert Core and John Renzulli as defendants. According to the complaint, under the direction of the company’s owner, Gaston Glock Sr., they pieced together the details and evidence used to convict the 59-year-old Jannuzzo of embezzlement and stealing a gun — charges that were overturned on appeal in 2013.

Jannuzzo served as Glock’s general counsel from 1991 to 2003, when he had a personal and professional falling out with Glock Sr., the lawsuit says.

According to the complaint, Glock Sr. had made efforts to sway Jannuzzo’s wife, who was also employed by Glock. Glock Sr. allegedly offered her “housing in Vienna, a car, and all the money she needed” if she would “take their friendship to the next level” and if she did not he told her “Jannuzzo would be finished.” She declined the offer anyway.

Jannuzzo resigned from the company when he confronted Glock Sr. about the matter and then informed him that “there was substantial evidence of illegal activities within the Glock Group,” the lawsuit says.

Following a 1999 assassination attempt on Glock Sr. by a company executive, Glock hired investigators to weed out corruption within the company, which they found and ultimately traced back to Glock Sr., according to the complaint. The investigation ended roughly around the same time as Jannuzzo’s service with the company.

The investigators, led by a former Assistant U.S. Attorney who was acquainted with Jannuzzo, were later indicted in Cobb County — the area of Glock’s Georgia facility — of embezzling money from the gun maker, but those charges were dropped due to insufficient evidence. One of the defendants filed a federal civil suit containing similar allegations as Jannuzzo’s against Glock in March, while the other two defendants sued the county.

According to the complaint, Renzulli and Core, who were not permitted to practice law in Georgia, packaged the narrative, evidence and workings of the case for collaborating investigators and prosecutors in the area.

The lawsuit says that the two influenced the testimony of another former Glock employee, Peter Manown, who also served as legal counsel for the company and was convicted in 2008 of embezzling money from the company but not imprisoned. Manown testified in Jannuzzo’s 2012 trial that the two had discussed plans to siphon money from Glock.

“Renzulli and Core pressed for charges against Jannuzzo based on what they could get from Manown — not what the documents or other corroborating evidence showed,” the lawsuit says.

The lawsuit also says that the two denied the inclusion of evidence that proved Jannuzzo attempted to return a LaFrance Specialties .45 caliber semi-automatic custom pistol that the company loaned him. Evidence such as witness testimony and documents that detailed the transaction, which would have proved that the statute of limitations closed thus nullifying the “theft by conversion” criminal charge. The latter partly explains why Jannuzzo won his appeal in 2013.

In 2009, Jannuzzo was sentenced to 7 years in prison followed by 13 years of probation, but he only served 3 1/2 years since he won his appeal.

The lawsuit says that due to the conspiracy, Jannuzzo was wrongfully imprisoned and suffered a blow to his professional livelihood and reputation. He is asking for damages to be determined by the court times three as well as legal fees.