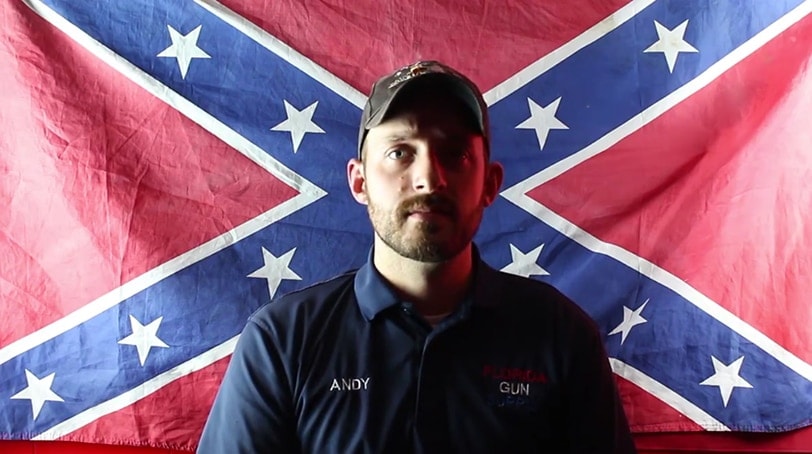 Seen here in a screen shot from a video, Florida Gun Supply owner Andy Hallinan sits in front of a Confederate battle flag and declares his shop a “Muslim-free zone.” (Photo: Facebook)

Members of a Muslim group are planning to attend a concealed carry class at a Florida gun shop recently declared a “Muslim-free zone” by its owner.

“Because if we can’t call evil ‘evil’ for fear of offending people, then we can’t really defeat our enemies,” Hallinan said.

Sitting in front of a Confederate battle flag, Hallinan defended his decision to exclude Muslims from his store. The video posted to Facebook received more than 71,000 views and was spurred by the recent attack on a military recruiting station in Chattanooga, Tennessee, where four Marines were killed by a 24-year-old naturalized U.S. citizen originally from Kuwait.

“I have a moral and legal responsibility to ensure the safety of all patriots in my community, and so effective immediately, I am declaring Florida Gun Supply a ‘Muslim-free zone.’ I will not arm and train those who wish to do harm to my fellow patriots,” Hallinan said.

Hallinan said he would also be offering free concealed carry courses and allow free public use of the range.

“Because we want the public to be able to go out and practice in case we are ever called upon to defend our lives or our community,” Hallinan said.

The Council on American-Islamic Relations has called on the Justice Department to investigate Hallinan’s actions as a possible violation of federal civil rights.

Shilby said he and the other Muslims planning on attending the concealed carry course will sit down and openly discuss the religion of Islam.

“And I’m going to teach him about the Quran and we’ll hopefully have a healthy exchange of ideas and hopefully let this incident result in some new friendships and new alliances,” Shibly said.

The DOJ set its sights on an Arkansas gun business in April for similarly declaring itself a “Muslim-free zone.”

Jan Morgan, owner of the Gun Cave Shooting Range, declared in September her business wouldn’t be catering to Muslims.