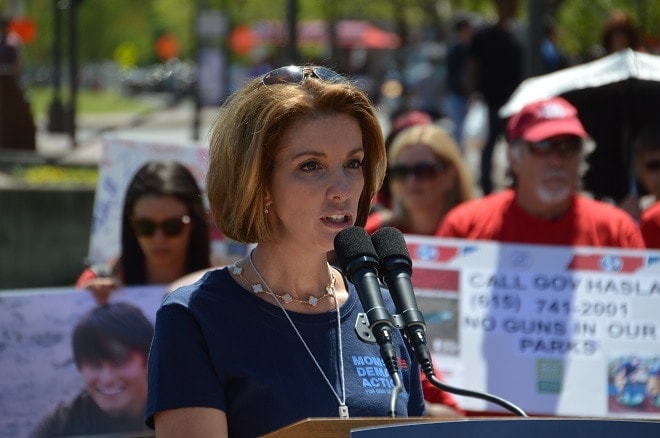 The head of Moms Demand Action used a piece in CNN this week to seek changes in the nation’s gun laws using shootings in Chattanooga and Charleston as examples. (Photo: Chris Eger/Guns.com)

The 950 word piece for CNN entitled, “Did gun law loopholes enable Charleston and Chattanooga?” attributed to Watts, devotes most of its text to chronicling the Bloomberg-backed Moms group’s campaign against Cabela’s to close the so-called “Charleston Loophole” before turning to the recent terrorist attack that left five U.S. service members dead at a military installation in Chattanooga, Tennessee.

“We’re still learning the facts about what happened in Chattanooga, however, recent media reports indicate the gunman took advantage of the online gun sale loophole and purchased at least one of his firearms where he knew he could buy a gun with no background check, no questions asked,” Watts wrote.

The purchase cited by Watts stems from a July 18 Reuters story, which reported that friends of the suspected Chattanooga gunman, Mohammod Youssuf Abdulazeez, purchased an AK-74, Saiga 12-gauge shotgun and an AR-15 via the online gun classifieds site Armslist.com.

Everytown for Gun Safety President John Feinblatt followed this up with a statement to Guns.com from his New York office Tuesday, saying, “In the last month we have seen two tragedies in Charleston and Chattanooga that highlight the loopholes that make it easy for dangerous people to get guns – loopholes that the NRA put in place and has fought to preserve.”

Fineblatt elaborated by decrying how easy it is for dangerous people to take advantage of the “online sales loophole” to buy guns.

For its part, Armslist informs sellers that he or she is responsible for obeying federal and state laws before finalizing a transaction, and directs sellers to contact the Bureau of Alcohol, Tobacco, Firearms and Explosives for any questions.

Further, a panel from the U.S. Court of Appeals for the 7th Circuit recently held that Armslist was not liable for a gun sold through its platform which was later used in a murder.

However, to cite that Tennessee – or any other state – guidelines for mandated background checks for private gun transfers would have prevented Abdulazeez from obtaining his guns may be a stretch as nothing disclosed by authorities thus far would seem to have prevented the 24-year-old from passing a background check for a firearm purchased over the counter from a licensed dealer.

Watts herself closes her piece with language that dismisses hyperbole in the debate of blame, but still seemingly defends citing the recent mass killings as reason to seek change in the nation’s gun laws and policies, even if the changes sought would not have prevented the very killings used to justify them.

“After tragedies such as Charleston and Chattanooga, as the details unfold about how something so horrible happened, it’s easy to fall into the trap of hypotheticals – the what if we had done something differently,” wrote Watts. “The truth is we cannot change the past, but we can demand a safer tomorrow.”