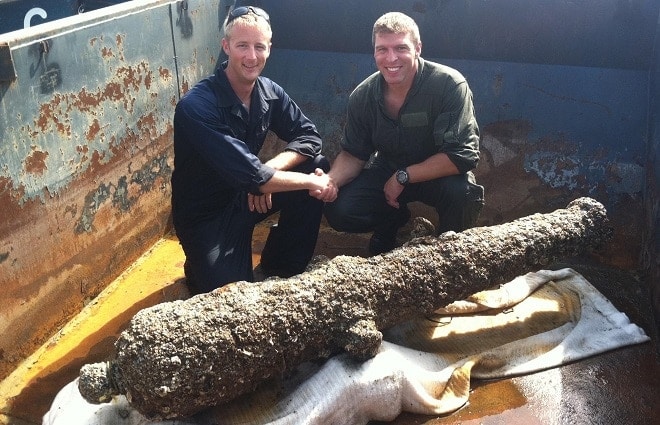 Navy Diver 1st Class Spencer Puett and Lt.j.g. Andrew Heckel pose behind the cannon recovered from the wreck site of the Civil War ironclad CSS Georgia, which has rested at the bottom of the Savannah River for over 150 years. (Photo: U.S. Navy)

U.S. Navy divers working in the muddy waters of the Savannah River pulled up the first of many cannon recovered from the wreck of the Confederate ironclad CSS Georgia.

The CSS Georgia, known as the “Lady’s Ironclad” as it was paid for largely by donations raised by women’s groups during the Civil War, was built in the state whose name she bears.

Under-powered, the primitive steam warship never fired a shot in anger and instead was burned near Savannah as Union Gen. William T. Sherman approached the port city on his famous  “March to the Sea” in Dec. 1864 to prevent it from falling into Union hands.

Now the Navy, in concert with the U.S. Army Corps of Engineers, is salvaging the wreck as it is in the way of an expansion of the port facility expansion and risks destruction.

The first barnacle-encrusted cannon was raised from the warship last week and will be turned over to the Naval History and Heritage Command for preservation.