2 servicemen at Chattanooga military facility may have been armed 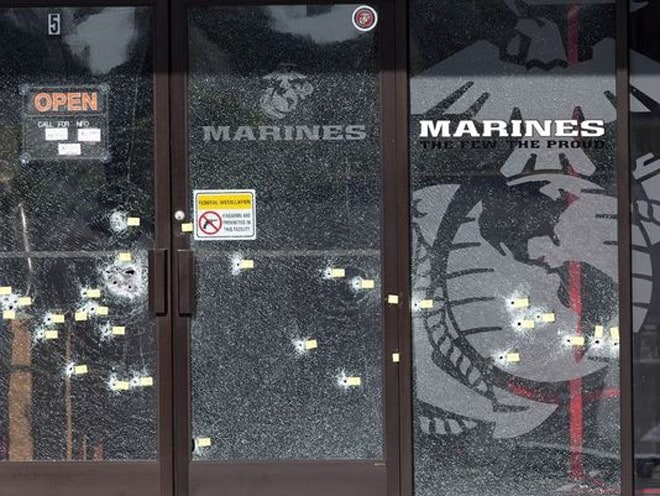 No one was killed at the shooter’s first stop on his deadly rampage – a recruiting center with bullet-proof glass in the front. (Photo: Navy Times)

Multiple sources indicate two servicemen who were at the Navy support center in Chattanooga where five people were killed during an attack last week may have been armed with personal firearms, although it’s not clear at this point if the man responsible for the rampage was shot by one or both of the men.

According to a report by The Washington Post, the Federal Bureau of Investigation recovered a Glock 9mm from the Navy Operational Support Center, and is working to determine whether the handgun belonged to one of the servicemen present. Additionally, authorities are using forensic evidence, including the autopsy report, to ascertain whether the shooter was struck by bullets from the Glock.

Federal law prohibits anyone other than law enforcement to carry firearms on federal property, including the support center where the attack occurred. It’s a policy which has received some scrutiny since the attack. However, four unnamed military officials familiar with the investigation confirmed with the Navy Times that Navy Lt. Cmdr. Timothy White, who was a commanding officer at the support center, was armed with his own gun and engaged in an exchange of gunfire with the shooter. Officials also confirmed that one of the Marines who was killed was carrying a firearm as well, although it’s unknown if he engaged in gunfire with the shooter.

White, who is a surviving witness of the heinous attack, has remained quiet since the shooting.

The shooter, Mohammad Youssef Abdulazeez, who was killed during the attack, fired more than 50 rounds into the front of a Marine recruitment center at a strip mall before making his way to the Navy support center where he opened fire again.

The weekend following the shooting, at least half a dozen governors in states across the country spoke out against military facilities being gun-free zones and signed executive orders allowing certain members of the National Guard to carry guns.