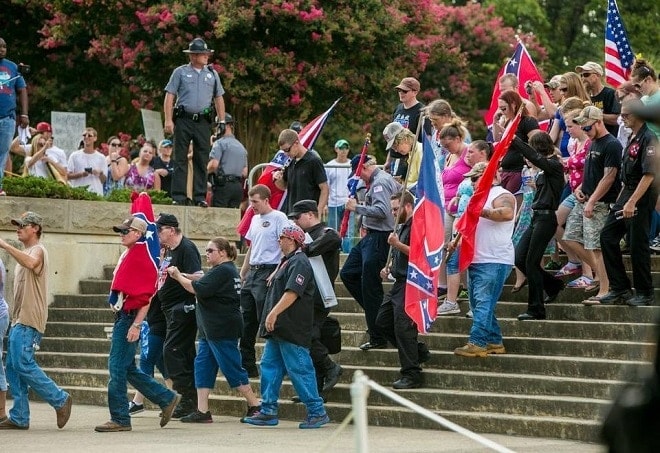 A rally at the SC State House in Columbia was the reason for a now-repealed ban on weapons. (Photo: Post and Courier/Jeremy Borden)

A temporary emergency gun ban implemented by the City of Columbia to disarm Confederate flag protesters around the State House was scrapped after the state attorney general warned it was likely illegal.

The city council passed the local ordinance banning weapons within 250 feet of the building earlier this month in anticipation of a planned demonstration by hate groups to include the White Knights of the Ku Klux Klan and the New Black Panther Party. The teeth in the ordinance, which was set to run for 30 days, included a $500 fine and up to 30 days in jail.

The area impacted by the weapon ban was the scene last weekend of a crowd estimated at 2,000 with white protesters rallying for the Confederate flag, hauled down from the State House largely outnumbered and protected by police. Although there was the occasional scuffle, the event was not deadly.

However, with the protest come and gone, state Attorney General Alan Wilson says the ban was an illegal encroachment on Second Amendment rights, and one the city had no power to pass in the first place.

“In this instance, we understand certainly the motive of the Columbia City Council in adopting the ordinance — to prevent violence,” wrote Robert D. Cook, solicitor general for the AG’s office in an 11 page opinion posted Monday.

“However, where the conduct being regulated by the Ordinance is also prohibited by State law, the punishment under state law is much more severe. Our Supreme Court has concluded that such conflicts are unconstitutional. On the other hand, where the Ordinance makes illegal conduct which is lawful under State law, that too is preempted and unconstitutional,” Cook said.

If challenged in court, warned Cook, the ordinance was unlikely to make it very far.

The ordinance has already been the subject of at least one legal challenge that is pending and, as reported by WACH, the Columbia City Council repealed the weapons ban in its Tuesday afternoon meeting.