A boy’s guide to girls, guns and dresses 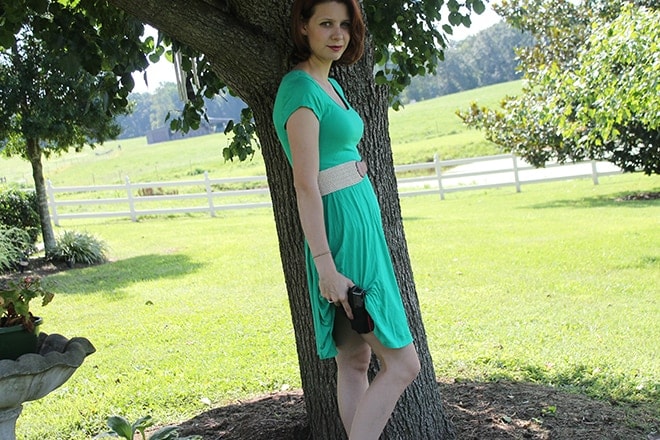 My phone vibrated in my purse, signaling I had a work related, Guns.com email. It was a message from my editor with a link and instructions to check it out. I had a few minutes so I followed the link to Field & Stream. Bill Heavey had written an article about concealed carry in a dress. I looked down at my own attire, a black and white knee-length dress and heels, and thought, “This should be good.”

Bill’s article referenced another article published by Outdoor Hub and written by Daniel Xu. Bill wittily described different modes of concealed carry for women, obviously poking at the Outdoor Hub piece. Though I chuckled at his subtle sarcasm on the topic, I still couldn’t help but wonder why two men had written articles about female concealed carry.

Any woman in the industry will tell you there’s a disparity in the way we are treated and portrayed. It’s no secret that the gun world, though attempting to change, still hasn’t quite reached the peak of its evolution in its treatment and incorporation of women. As I previously stated, I feel Bill’s article was a satirical attempt at illustrating how ridiculous Daniel Xu’s article is. For that, I’ll give a Bill Heavey a pass.

Daniel Xu’s article, though, I find just plain offensive. While I can appreciate the need for more female centric content in gun writing, especially in the concealed carry forum, these topics need to be taken out of hands of writers and publishers just looking to cover Google search terms and firmly in the hands of people who actually have experience on the subject. Unless the male author regularly sports Vera Wang or the like, he has no business offering authority on this subject.

Xu’s article itself is a hodge podge of misinformation and bad pictures. In fact, at one point he confuses a method of carry for a type of holster. (For clarification, the Hip Hugger is a holster made by Can Can Concealment so women can abdomen or back carry.)  As a journalist, I’m offended by writers who purport to be something they’re not or know something they don’t (and who write articles that are just plain bad).  As a woman, I’m downright angered by the presumption. Boys, this is the 21st century. We don’t need you to speak for us, especially on topics you couldn’t possibly know anything about.

This kind of thing–and the mentality that female shooters should be grateful for this information regardless of the source–illustrates perfectly what is wrong with the firearms industry’s relationship with women. Instead of assigning this to a knowledgeable female writer who can speak from experience, the publisher chose to give the assignment to a man (or chose to publish an article a man wrote) who I doubt has ever worn a dress let alone worn one in the process of concealed carry.  That was the decision they made, because they probably didn’t even see anything wrong with it.  Many other publications don’t either.

There are many more female gun writers these days (Guns.com has quite a few), but aside from a handful of dedicated female firearm websites, we are severely under-represented in this industry and though I chose to call out Bill Heavey and Daniel Xu this time, their articles aren’t anything new. A quick Google search returned other articles written for women by men. Digging even deeper, it was disheartening to see the lack of female names listed in author bios.

The gun world is trying and I know growing pains are inevitable. I think it’s wonderful companies like Dene Adams, Can Can Concealment, and the Well Armed Woman now cater to women’s concealed carry needs. I love to see women like Julie Golob heading professional shooting teams. But I think we also need to focus some of that attention on the publishing side of the firearms industry.

May I remind these publications, the ones who hire men to write female articles and the ones that don’t even hire women authors at all, that the fastest growing contingency in the firearm industry is the exact group of people you aren’t representing. Start making women’s articles for and by actual women. It’s long overdue.