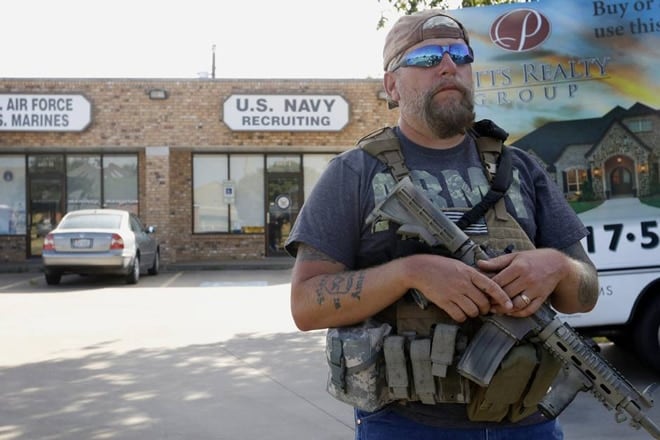 Terry Jackson stands outside a recruiting center in Cleburne, Texas. While the citizens may mean well, the Army is asking them not to stand guard outside recruiting centers. (Photo: Rose Baca / The Dallas Morning News)

A letter issued Monday by the Army Command Operations Center-Security Division indicated the armed civilians standing guard outside of military recruiting centers across the country should be treated as a security risk.

After five servicemen were killed during a terrorist attack last week in Chattanooga, concerned citizens armed themselves and took to protecting those working at their local recruiting centers. Federal law prohibits anyone – including members of the military – from carrying firearms on military installations and state facilities and, for many, the idea of military personnel being unable to legally defend themselves just simply does not sit well.

But now officials are asking armed civilians to stay home and for recruiters to not only avoid these individuals, but call the police if they feel threatened by those carrying firearms outside of the facilities, according to a report from Stars and Stripes. Additionally, an Army security report should immediately be filed in the event of a confrontation.

“I’m sure the citizens mean well, but we cannot assume this in every case and we do not want to advocate this behavior,” the letter stated.

“If questioned by these alleged concerned citizens, be polite, professional and terminate the conversation immediately and report the incident to local law enforcement,” the letter continued.

The command advised recruiters to clearly communicate with law enforcement and ensure they know the individuals in question are armed and may – or may not – be in possession of a carry permit.

Kelli Bland, a spokeswoman for Army Recruiting Command, said there are other ways concerned citizens can serve as security for their local military personnel other than walking around with firearms.

“Local communities can support our security by reporting suspicious activity, particularly around recruiting centers,” Bland said in an email to Stars and Stripes.

Likewise, the U.S. Marine Corps issued a statement with a similar sentiment on Wednesday.

“While we greatly appreciate the support of the public during this tragedy, we ask that citizens do not stand guard at our recruiting offices,” the statement read. “Our continued public trust lies among our trained first responders for the safety of the communities where we live and work.”

Whether or not to arm military personnel has been at the center of controversy since last week’s shooting. And while governors in more than half a dozen states have issued executive orders doing away with gun-free zones at military facilities and allowing their military personnel to be armed, not everyone is on board with the idea. In fact, Capt. Jeff Davis, spokesman for the Department of Defense, confirmed Wednesday that the Pentagon has no plans to amend their policy and allow members of the military to be armed.