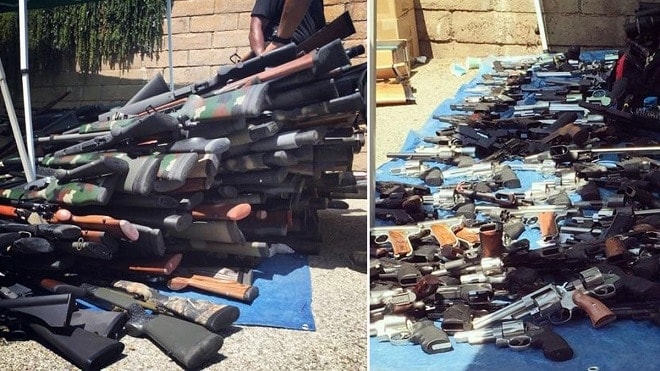 Authorities have identified the mysterious gun collector who left behind a haul of 1,200 firearms as Jeffrey Alan Lash. (Photo: NBC)

Police have identified the Los Angeles area man found decomposing in his car last weekend and it turns out that he may – or may not be – a spy.

The discovery of the collection of more than 1,200 firearms of all kinds, 6.5 tons of ammunition and $230,000 in cash in the Palisades Highlands condo last weekend was prompted after the owner’s fiancee contacted authorities when she returned home to find his corpse still in his vehicle where she had left it two weeks before.

The man, identified as Jeffrey Alan Lash, 60, but known to his neighbors only as Bob Smith, had fallen ill on July 4 in Santa Monica and died shortly afterward in the parking lot of Bristol Farms on Wilshire Boulevard.

Before his death, Lash cautioned his fiancee, Catherine Nebron, to leave his body in one of his 14 vehicles at their townhouse and the intelligence agency he worked for — who had him under constant surveillance — would retrieve it. Lash further explained that he was suffering from chemical weapons exposure suffered while on a mission overseas.

With that, she left town for Oregon but when she returned was shocked to find his cadaver still where she left it 10 days before.

Her next call was to her attorney, Harland Braun, who then contacted authorities to remove Mr. Lash and what at the time was believed to be a collection of 500 guns. This later ballooned as an extensive effort by authorities to impound the firearms evolved.

While not much is known of Lash, Braun dismisses claims that he was the Jason Bourne of LA.

Braun advised that, even with the collection of Lash’s firearms and ammunition, “[T]he place is still loaded with tools, scopes, books, all kinds of craziness. If you saw the place, you would know it was the home of an insane person.”

As noted by the Palisades News, police worked through the weekend and responded with numerous bomb squad vehicles and an explosives sniffing dog, recovering hundreds of guns and pallets of ammunition. Images show at least one .50 caliber rifle, which can no longer be purchased in California, as well as stacks of handguns being carted away by authorities.

Some items were reportedly destroyed in place by explosive demolition.

Staff at an area restaurant classified the behavior of Lash and his fiancee as peculiar, with the man often claiming to work for the CIA and becoming upset if photographs were taken near him.

“They always came in two separate cars. Neither had license plates, but no one ever stopped them,” said Francesco Schiff with the Casa Nostra restaurant. “He always paid cash, always had raw filet mignon. They never ate with friends.”

LAPD Deputy Chief Kirk Albanese told the Los Angeles Times there is no reason to believe Lash was connected to illegal activity and was likely just a firearms collector. Nonetheless, the gun unit of the department’s Robbery-Homicide Division is checking the history and legality of each impounded firearm

Shirley Anderson, the longtime partner of Lash’s late father who was a microbiologist, said the man left home in the 1980’s to attend UCLA and become a scientist, but later dropped out and was secretive about his affairs.

“He was just a loner, as far as we were concerned,” Anderson said.

Guns.com contacted the Central Intelligence Agency’s Public Affairs office in an attempt to confirm if Lash was ever employed with the agency, but did not receive a response by article publication.