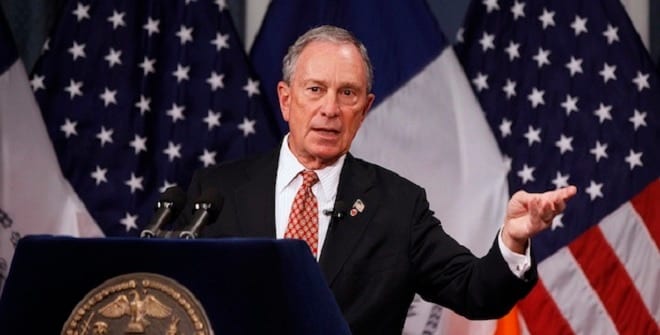 A Bloomberg-backed gun control group sees the prospect of prohibiting gun sales to those on the government’s secretive terror lists as a step to preventing terror attacks. (Photo: Reuters/Lucas Jackson)

Triggered by a recent attack on U.S. service members, a national gun control group is offering a solution in the form of reducing the pool of people eligible to buy guns.

This would lead to closing what the group terms the “Terror Gap” by allowing the Department of Justice to deny firearms background checks for those who appear on consolidated terrorist watch lists to include the controversial and troubled no-fly list.

The call, issued by former New York Mayor Michael Bloomberg’s Everytown for Gun Safety this week, comes only days after an act of domestic terrorism claimed the lives of five Marines and sailors in Chattanooga, Tennessee.

Although it has not been disclosed that the suspected shooter was on a terror watch list, the gun control organizations contend that even if he were, current law would have allowed him to purchase a firearm legally.

Everytown contends the Terror Gap means a terrorist could pass a background check and buy a gun at a licensed gun dealer, or just go online or to a gun show to purchase a firearm in an unlicensed, private sale.

“Although authorities are still exploring the Chattanooga shooter’s potential ties to terrorist and extremist groups, initial reports say he was not on any terror watch list,” reads a statement from Everytown emailed to Guns.com. “But the reality is that even if he had been, our current laws do not prevent suspected terrorists from arming themselves. Many individuals on terror watch lists are barred from boarding planes, but the FBI remains powerless to block gun sales to these same suspected terrorists.”

The group cites a Government Accountability Office study that found individuals on the terror watch lists tried to buy guns and explosives 2,233 times between February 2004 and December 2014.

However, the no-fly list and other terror watch lists are prone to false positives, easily defeated and often strip those who find themselves listed of their due process rights, contends the American Civil Liberties Union, who estimate as many as one million names may be on the government’s terror watch lists.

The ACLU recently won a federal lawsuit on behalf of 13 U.S. citizens and permanent residents including at least four military veterans who were restricted from flying through a secretive process without explanation. While the court ultimately concluded the lack of an opportunity to contest their placement on the no fly list violated the plaintiffs constitutional due process rights, few changes were made to mitigate the program.

Since its inception following the attacks of 9/11, the mushrooming no fly list has ensnared many unlikely individuals through its fuzzy methodology to include an 18-month-old toddler, a cub scout from New Jersey, Marines returning home on leave from Iraq, gun control stalwart U.S. Senator Ted Kennedy, South African President Nelson Mandela, pop singer Cat Stevens, and even federal air marshals.

Georgia lawmaker Rep. John Lewis, a prominent House Democrat who marched with Martin Luther King in the civil rights era, was prevented from flying at least 35 times due to mix-ups with the list.

Further, due to language translations between some Middle Eastern dialects and English that allow for some names to have as many as 500 combinations, the very concept of a list itself is flawed argues the ACLU.

Everytown cites the efforts by California Democratic Senators Dianne Feinstein and Barbara Boxer who, along with a virtual “who’s who” of anti-gun lawmakers are proposing to give the DOJ increased powers to deny gun transfers based on classified terror watch list, as the means to close the gap.

The Denying Firearms and Explosives to Dangerous Terrorists Act of 2015, entered as S.551 in February, would give the Attorney General the power to deny transfer of a firearm as long as she has “reasonable belief” that it could be used in terrorism to include both international and domestic varieties. Further, DOJ would be allowed the ability to withhold information pertaining to the denial if releasing the data would compromise national security interests.

The legislation has been referred to the Committee on the Judiciary and has been stationary for several months, but U.S. Sen. Chuck Schumer, D-N.Y., called for action on the bill last month the wake of the attack on Emanuel AME Church in South Carolina, despite the fact that the suspect in that event was not believed to be on a terror watch list.