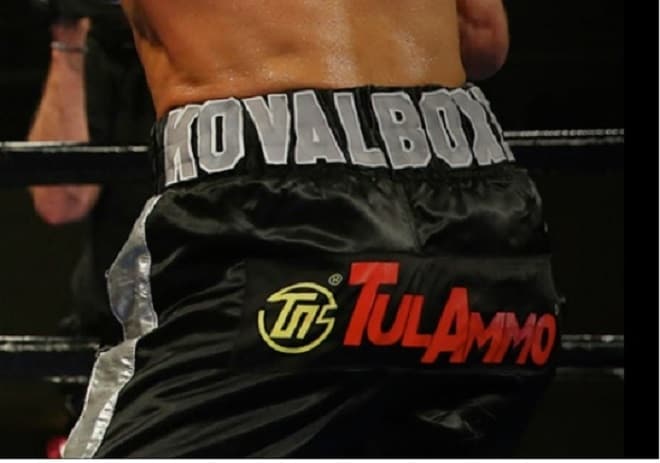 Home Box Office is demanding champion boxer Sergey Kovalev remove the logo of an ammunition company from his shorts before an upcoming title bout this weekend.

The fight, in which Kovalev, the reigning unified WBA, IBF, and WBO light heavyweight champion, is set to defend his title against up and coming IBF mandatory challenger Nadjib Mohammedi, is set for this Saturday and is to be broadcast live on cable and satellite by the network from Las Vegas.

However, HBO is demanding that Kovalev ditch the logo of one of his sponsors, Texas-based Tulammo, which is carried on the seat of his trunks.

This has the bell ringing in the corner of the gun industry trade group, who classify the move by HBO as hitting below the belt.

“TV networks are certainly free to decide what they broadcast, but the typical daily HBO fare of murder, mayhem and the glorified misuse of firearms suggests a certain degree of hypocrisy in HBO’s reported decision to ban the simple logo of a company that manufactures ammunition,” Lawrence Keane, senior vice president and general counsel of the National Shooting Sports Foundation, wrote Wednesday.

“It is strange that a media company such as HBO has decided to infringe on the First Amendment rights of the boxer and Tulammo by censoring what can be printed on a pair of trunks,” said Keane. “The network is known for sometimes-violent programming such as True Detective, The Wire and The Sopranos (which coincidentally featured a handgun in its logo). Would HBO have the same inclination to censor any of their show writers or their famous talking head Bill Maher? Would they dare censor their content for political reasons?”

Kovalev has not made a public statement.

Guns.com has asked both HBO and Tulammo for comment but did not receive a response by article publication.

This story has been updated and a follow-up piece can be read here.