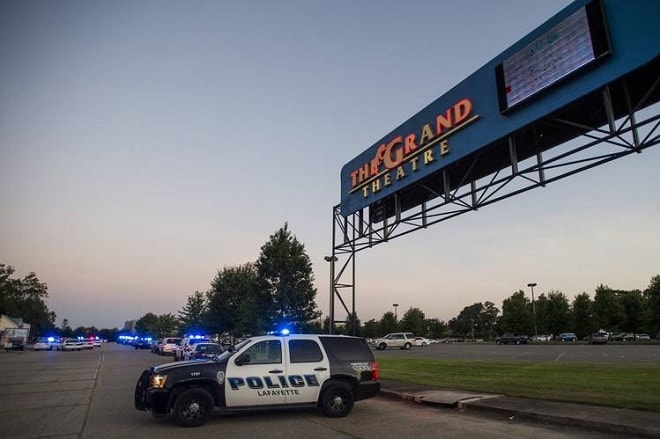 Police in Lafayette are confirming that a man opened fire in a crowded showing of a popular film Thursday night, killing two before taking his own life.

The attack occurred just after 7 p.m. about 20 minutes into a scheduled showing of “Trainwreck” in the Grand 16, a stadium-style multiplex theater. Authorities estimate there was a crowd of 100 inside Theater No. 14 at the time.

Lafayette Police Chief Jim Craft told KLFY the two killed were sitting in front of the shooter, an unidentified 58-year-old white male who suddenly stood up and began firing a semi-automatic handgun.

Authorities believe the shooter attempted to leave the theatre with the crowd but then took his own life when he saw two officers in the parking lot.

“We don’t know if this was just a random act or whether it was a domestic situation,” Craft said.

Katie Domingue, attending the showing with her fiancee heard a loud noise and witnessed the killer shooting down into the seats in front of him.

“He wasn’t saying anything. I didn’t hear anybody screaming either,” Domingue told The Daily Advertiser.

The Grand Theatre, a chain of cinemas throughout the Southeast and headquartered in New Orleans, prohibits the possession of firearms or weapons of any kind with or without a permit as noted on their posted conduct policy.

Gun control organizations to include the Brady Campaign to Prevent Gun Violence, former U.S. Rep. Gabby Gifford’s Americans For Responsible Solutions, former New York Mayor Michael Bloomberg’s Everytown for Gun Safety and Moms Demand Action posted news of the Lafayette attack – in some cases within minutes – many referencing past incidents such as the Aurora movie theater shooting of 2012.

“Monday was the third anniversary of the Aurora shooting. Now this,” read a post from Everytown.

Louisiana Gov. Bobby Jindal arrived at the scene and made a statement calling for help for the community while supporting the work of the first responders.

“I want to praise the law enforcers who ran toward danger,” Jindal said. “This is a time for us to come together. What we can do now is pray. We can hug these families; shower them with love, thoughts, and prayers.”

I'm on my way to Lafayette right now. Please say a prayer for the victims at Grand Theatre and their families.