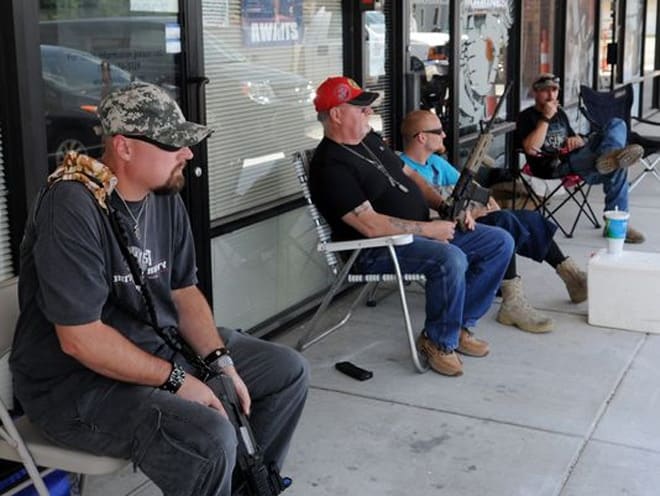 Several armed volunteers were outside of the recruiting center when the incident occurred. (Photo: Jess Grimm/Eagle-Gazette)

God bless you, but you’ve got to go. That was the sentiment Thursday afternoon at a U.S. Army recruiting center in Lancaster, Ohio, after an armed civilian standing guard outside of the center accidentally fired a round from his AR-15.

Reed said he was outside of the strip mall when someone asked to look at his rifle. Reed agreed, but while clearing the weapon, he accidentally fired a shot into the pavement, the Eagle-Gazette reported. No one was injured and – other than leaving a small hole in the pavement – there was no damage.

Nonetheless, local law enforcement responded to the incident, which resulted in a citation for accidental discharge in city limits, a fourth-degree misdemeanor. Reed’s gun was also confiscated – at least until he appears in court next week.

If convicted, Reed could face up to 30 days in jail. Ironically, according to court records, Reed was convicted of the same offense two years ago, resulting in a $50 fine.

Shortly after Thursday’s incident occurred, U.S. Properties Group – the company that owns the strip mall where the recruiting center is located – issued a statement saying, “For the safety of tenants, customers and construction personnel working in the immediate vicinity of the Military Recruiting Center, it would be best to request the removal of the armed individuals.”

The company asked the officers responding to the accidental shooting to escort all armed civilians from the property, and the officer telling them to leave reportedly said, “God bless you,” as he escorted them away.

In a telephone interview with The Columbus Dispatch, Reed said he’s nobody special and just trying to do his part for his country.

“I’m just a guy doing my job because my own government wouldn’t do it,” he said, referring to the fact that federal law prohibits military personnel from carrying firearms at the recruiting centers and other military facilities.

However, the day before the accidental shooting, following suit with at least half a dozen other governors, Ohio Governor John Kasich authorized the Ohio National Guard to carry firearms at recruiting centers.