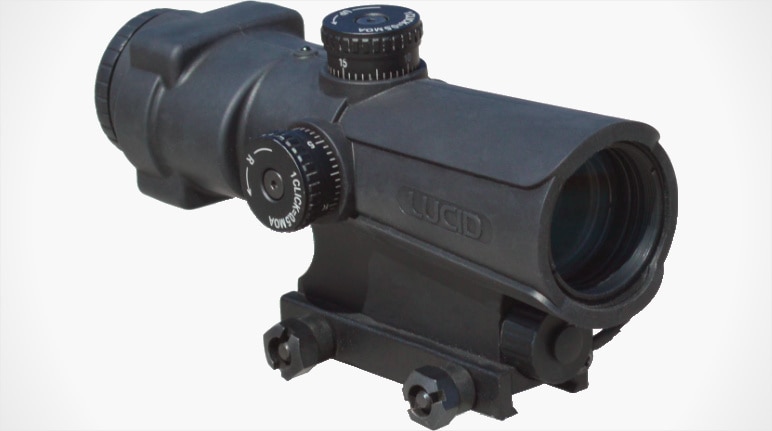 Lucid Optics is now shipping their fixed 4x P7 riflescope after first unveiling it at the top of 2015. Designed for ARs and other rifles with flattop receivers, the P7 is a rugged, compact scope with an illuminated range-finding reticle.

The P7 uses a housing similar to their 1x HD7 red dot scope. It has a rapid-acquisition reticle with a “measuring tape” to estimate holdovers for shooting at all ranges. The reticle is in MOA for use with any cartridge and has holdover hashes out to 80 MOA for the long shots.

One nice thing about the P7 is that it uses the same power source as the HD7: a single AA. Unlike a lot of hunting and tactical gear the P7 doesn’t use expensive or hard-to-find batteries, it uses a regular AA cell, something most people already have around the house. The battery compartment is built into the scope mount and sealed shut with a cabled screw cap.

The P7 has an integral mount with reversible mounting pins that let the shooter place the screw knobs on either side of their rifle. This is handy for rifles with side charging handles that often put knuckles in harm’s way with oversized scope mounts and for anyone who intends to carry their rifle slung; it keeps the knobs from poking you in the ribs. 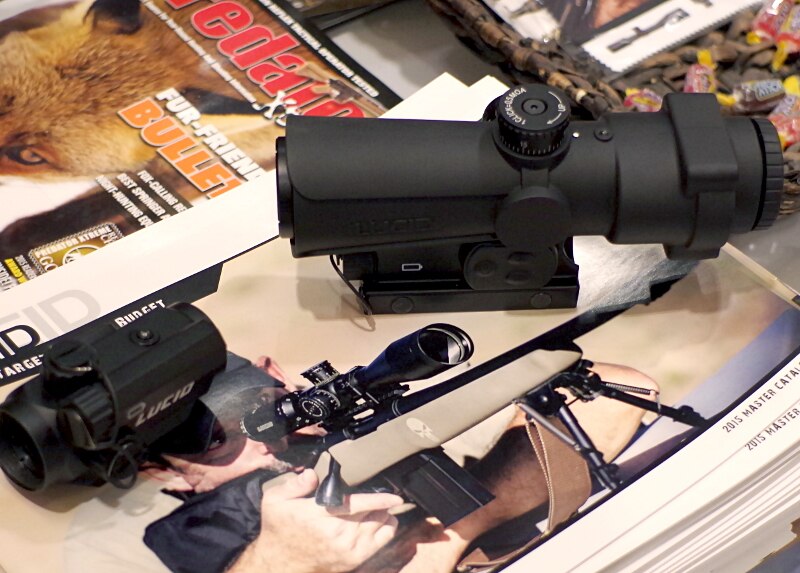 We got a glimpse of the P7 at SHOT Show earlier this year. (Photo: Max Slowik)

Other features include 10 brightness settings, a light meter and an automatic brightness setting for the reticle. It’s rated to run for 2,500 hours on one AA in normal use, or about 14 weeks. It’s not the sort of optic you turn on and leave on for years at a time but it’s not going to leave you hanging in the field, either.

The scope has an automatic shutoff to reserve power and uses chunky over-molded push buttons to turn off and on. The buttons are easy to find and use even with gloved hands, and the rubber molding covers the entire scope body for impact and water resistance.

Like most modern glass its built to be waterproof, shockproof and fogproof, and at 19 ounces including the integrated mounting system, the P7 won’t drag your gun down like a heavier optic. This makes it versatile as a fixed scope for a range gun, hunting or even patrol rifle.

The P7 has an MSRP of $435, right in line with their other magnified scopes. Real-world prices should be a bit under $400, making this an attractive option in the increasingly-popular world of fixed-magnification scopes.