Not the first Islamic Tennessean to fire on military installation 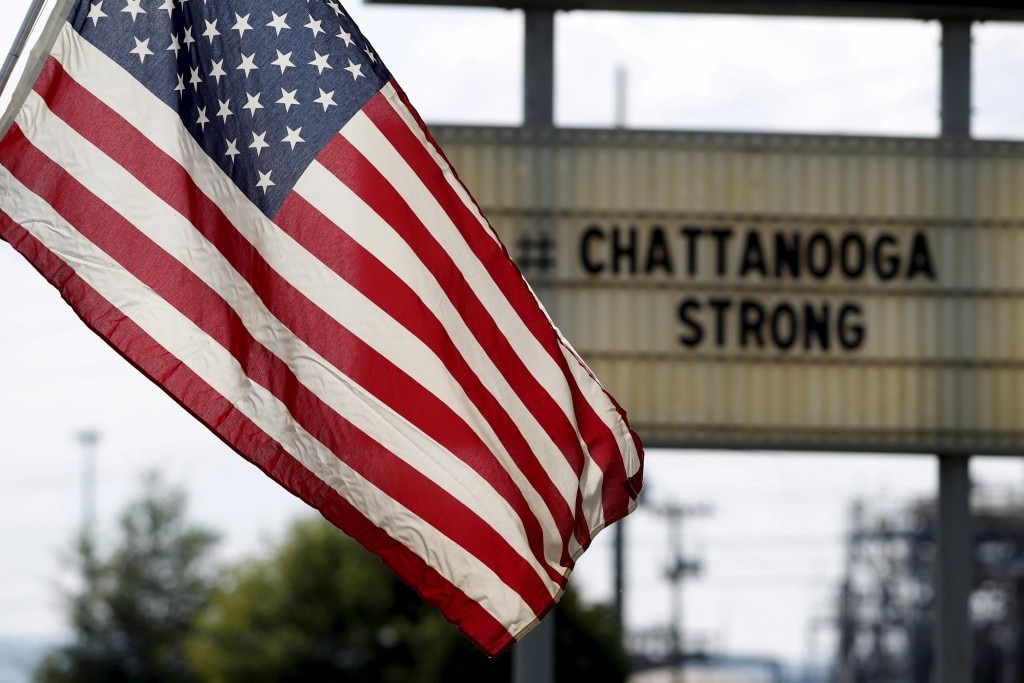 The U.S. flag flies alongside a sign reading “# Chattanooga Strong” in honor of the five Marines killed in Chattanooga, Tennessee, July 16, 2015. (Photo: PBS)

The recent killing of five people at a military recruitment center in Chattanooga, Tennessee, was shocking and a surprise to many, but it was just one more in a string of high-profile shootings as of late.

Investigators are continuing to follow some 400 leads on the July 16 shooting and currently have no new information, FBI’s supervisory special agent in Chattanooga, Jason Pack, told Guns.com on Friday.

Representatives from the Naval Criminal Investigative Service, the Marine Corps, FBI, ATF and others held a press conference Wednesday and offered additional details about the shooting:

It was just before 11 a.m. when Mohammad Youssef Abdulazeez drove up to the Armed Forces Recruitment Center and fired several shots from his vehicle. He then left the Lee Highway and traveled to another facility on Amnicola Highway before crashing into the Naval Reserve Center gate. Armed with an rifle, a handgun and several magazines, Abdulazeez got out of his vehicle and approached one of the buildings.

A service member fired on Abdulazeez and he returned fire, sending several rounds into the building before he reached it. Once inside, he fired on service members he encountered and upon reaching the motor pool shot and killed two military personnel. He later killed three more.

Once he tried moving inside the compound, the gunman was engaged by officers of the Chattanooga Police Department, who then killed the gunman.

In all, the shooter killed four Marines and one Navy sailor.

Though it’s still too early for authorities to compare this shooting to other cases, the fact that the recruitment center shooting involved U.S. military personnel on American soil isn’t unique, nor is the fact that it was carried out by a reportedly radical Islamist.

It certainly wasn’t the first time a shooting like this was carried out by an Islamic Tennesseean. As Politico pointed out in a piece published Thursday, the alleged Chattanooga gunman and Abdulhakim Mujahid Mohammed, the man who shot up a recruiting center in Little Rock, Arkansas, in 2009, were both raised in Tennessee.

Both men were radicalized after visiting the Middle East and were influenced by the teachings of fundamentalist Islam and the sermons of Anwar al-Awlaki, the first American citizen in 2011 killed by a U.S. drone strike.

Both men were also roughly the same age when the shootings occurred. Abdulazeez, 24, was on the high school wrestling team and grew up in the middle-class neighborhood of Hixson, located about 18 minutes north of the city’s center, Chattanooga Times Free Press reported.

Before converting to Islam, Mohammed was known as Carlos Bledsoe and he had a promising future as his father Melvin, owned a tour company in Nashville. When Bledsoe went off to college to study business, his parents thought he would return with his degree and take over the tour company, allowing them an early retirement, according to a statement given by Melvin at a 2011 Homeland Security Committee hearing. Mohammed was 26 by the time he was sentenced to life in prison the same year.

Melvin said his son had fallen prey to Yemeni extremists at a local mosque, who then helped facilitate his 16 month visit to Yemen, promising the new convert a chance to visit Mecca in Saudi Arabia.

The same year Mohammed carried out the 2009 Little Rock shooting, an Army psychiatrist with radical Islamic sympathies shot and killed 13 people and wounded 29 others at Fort Hood in Texas.

The FBI would not comment on any comparisons between the July 16 Chattanooga shooting and past cases as the investigation is ongoing.