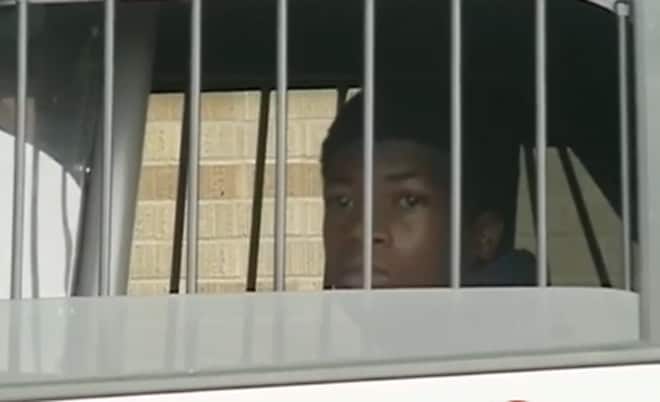 An unnamed 15-year-old was arrested for aggravated assault, while his friend went to the hospital with a gunshot wound. (Photo: WDSU)

An 18-year-old man was shot after he and at least two accomplices broke into a New Orleans home Wednesday afternoon, and it apparently wasn’t the first time the suspects had an encounter with the residents either.

According to reports from local media, the homeowner’s daughter, whose name is being withheld, was home alone when three men broke into the house around 12:30 p.m. The daughter barricaded herself in a bedroom, locked the door, then called her father for help.

The father, who was armed with a gun, arrived at the home soon after receiving the phone call and found the three suspects in his house. Two ran out of the house, while the third suspect initially attempted to hide in a closet, but ran off as well after the father found him.

The father chased the three men through the back yard, but when 18-year-old Imani Smith made a gesture as if he was reaching for a gun, the father shot at him, striking Smith once in the thigh.

Smith continued to run and even managed to jump a fence before collapsing a short distance away.

Pernell Williams, who lives nearby, told a local Fox affiliate he was sleeping on his bed when he was awakened by the gunshots. When he looked outside, he saw Smith lying on the ground.

Police responded to the scene and Smith was transported to the hospital where he received treatment for the non-life threatening wound. He will face charges upon his release.

Authorities said they recovered items which Smith apparently took from the home during the break-in.

A 15-year-old was also arrested and charged with aggravated assault for an unreported incident that occurred with the same victim a few days prior, although authorities didn’t specify if the assault involved the father or his daughter.

Area residents say they’re fed up crime in the area and believe the homeowner acted appropriately when he shot the teen who broke into his house. Williams said if something isn’t done about the crime rate soon, there will be more shootings similar to Wednesday’s.

“We need to do something with the young people around here,” said another neighbor, Damond Williams. “We need to get them more active where they won’t be out here with this craziness.”

No charges have been filed against the homeowner and the daughter was not harmed during the home invasion.