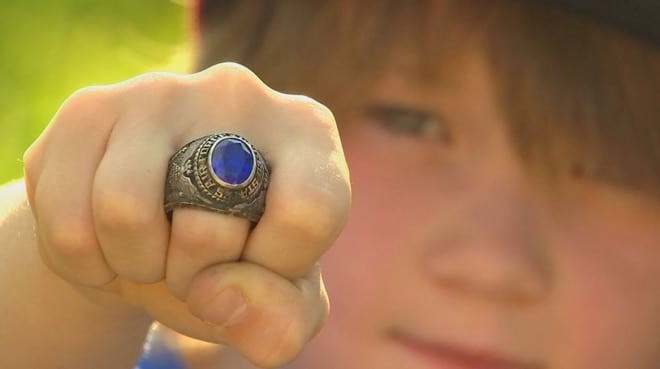 When 8-year-old Wyatt Groff found an Air Force ring partially buried by the Crow River in Delano, Minnesota, last week, he wanted to keep the cool find for himself, but knew trying to locate the owner was the right thing to do.

The ring has a blue stone, an eagle with a shield on the side and “United States Air Force” engraved on the top with the roman numerals for 1947.

Wyatt’s mom, Nachelle, said she took to social media to try to track down the owner and contacted her local VFW and American Legions as well, all to no avail.

“My first inclination would say this is from the Air Force Academy,” said John Bibeault, Vice President of the Scholastic division at Jostens, the company that makes all of the rings for every branch of the military.

However, a representative from the Air Force Academy said it didn’t appear to be a ring they give to their graduates, but he’s not totally sure.

Bibeault said the ring was most likely made by Jostens and if Wyatt brought it to them, they trace the design and the year to find the owner.

The ring also has initials engraved on the inside, which Wyatt said the owner will have to verify so he knows for sure it’s going to the right place.

Anyone with any information on the ring can contact Wyatt’s mom, Nachelle, at nachelleg88@gmail.com.