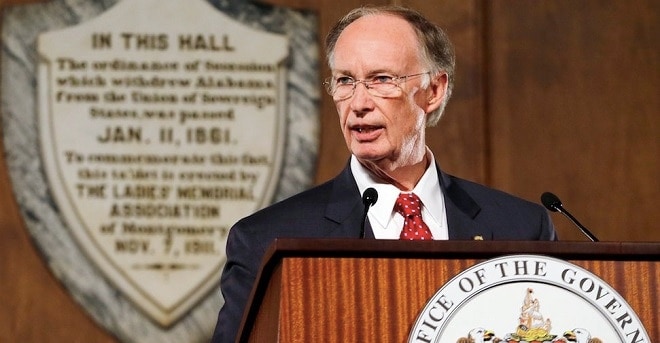 Gov. Robert Bentley late Friday ordered workers to remove “no weapons beyond this point” signs at all state rest areas.

The governor’s move came following a back and forth between Alabama Department of Transportation and state lawmakers over the legality of banning guns at rest areas for all those other than law enforcement.

While Attorney General Luther Strange had the law under review, Bentley is upping the ante by ordering the signs, erected in 2013, hauled down.

“I have ordered the AL Department of Transportation to remove signs banning weapons at all Alabama rest stops to comply with state law,” said Bentley on social media Friday.

The crux of the issue boiled down to the fact that some state lawmakers felt the department had overstepped its authority to implement the gun free zones in the first place, as only the state legislature had the authority to restrict the legal carry of firearms.

“I think that’s certainly an overstep,” state Rep. Barry Moore, R-Enterprise, told Yellowhammer News. “The Second Amendment is pretty clear: [government] SHALL not infringe. It seems like more and more, government tends to infringe on our right to bear arms. If anything I think we need to be getting rid of gun-free zones, not creating more of them.”

ALDOT representative Tony Harris had cautioned before the governor’s action the agency would await the attorney general’s opinion and take appropriate action at that time. The agency has not released a statement since Friday.

Bentley has often moved to promote the state as Second Amendment-friendly when enticing gun makers to the state while the Strange has repeatedly joined federal lawsuits against strict gun laws in other states while cautioning local governments in Alabama against violating the state’s preemption laws.

Bentley’s move came the same week he advised media members of the Alabama National Guard would be armed while in uniform as a response to the act of domestic terrorism in neighboring Tennessee earlier this month that saw the death of five service members.

I have ordered the AL Department of Transportation to remove signs banning weapons at all Alabama rest stops to comply with state law.