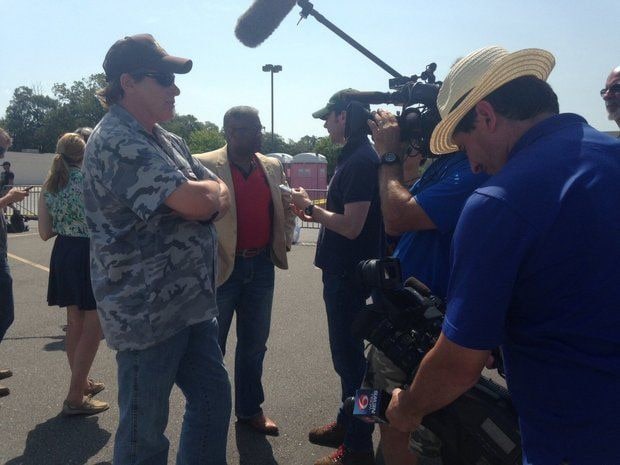 Musician Ted Nugent and Lt. Col. Allen West, both gun rights proponents, laid flowers for the victims of the shooting of The Grand 16 in Lafayette. (Photo: Diana Samuels/The Times-Picayune)

Before reporters and cameramen, the pair visited The Grand 16 theater to lay flowers at the scene where a gunman opened fire, killing two women and injuring nine others before taking his own life last week.

Nugent, who was in town for the Louisiana Outdoor Expo, said he was there just to show support for the victims.

“I think it’s inappropriate to even approach that subject (of guns),” he told reporters. “I think it’s all about prayers for the victims and the families, showing support for the community. Instead of hardware, I think we should talk about heart-ware.”

While his words jab at political opponents, Nugent published an editorial attacking gun-free zones five days after a gunman killed five U.S. servicemen in Chattanooga, Tennessee. Many gun rights advocates argue that abolishing gun-free zones would allow permitted individuals to carry firearms freely and that would in turn serve as a preventative measure for mass shootings.

West, however, said political policy could have made a difference in the Lafayette shooting.

“What could have been different is if the person who obviously displayed some mental illness (shooter John Russell Houser) was not able to freely travel across our country,” he told reporters. “I don’t think that a gun just jumped up by itself and did what it did. I think there was an individual and that person is responsible for his actions.”