Tensions over Confederate flag, racial slurs may have led to shooting 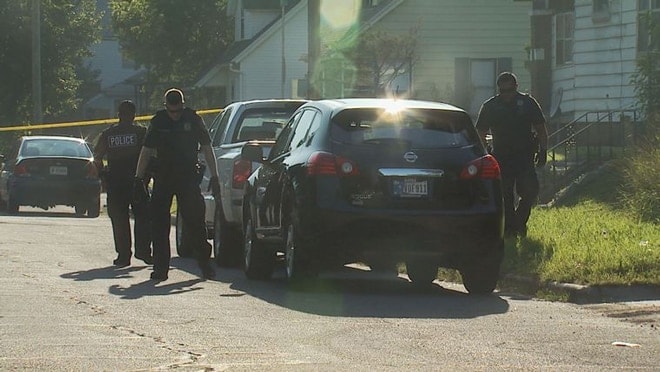 While talking to the police, the driver apparently ripped the Confederate flag off of his truck. (Photo: WSBT)

Police in South Bend, Indiana, are investigating a Thursday evening incident that ended in a shooting and may have been provoked by a man prominently displaying a Confederate flag on his truck and yelling racial slurs.

Authorities were alerted to the shooting around 6:30 p.m. via ShotSpotter, a high-tech system which detects gunshots and relays the location to law enforcement officials. When responding officers arrived, they found a 28-year-old man suffering from multiple gunshot wounds, but according to witness accounts, the shooter may have fired in self-defense.

Witnesses said the incident started when the man, who was driving a white Ford with a Confederate flag attached to it, pulled into a convenience store and began yelling racial slurs at a group of three black men standing outside. Jessie Chembers, the store clerk who was working that night, said the group yelled at the man to leave, but at some point the driver pulled out what appeared to be a large knife or machete, the South Bend Tribune reported.

Eventually, the man began to drive away, but before he exited the parking lot, he slammed his truck into reverse and quickly backed toward the group of men, who responded by firing several shots from a handgun at the truck, Chembers said.

The driver then took off and officers found him a short distance from the store at a friend’s house. He was shot in the face and back, but his friend said he is doing okay.

The three men, including the shooter, were already gone by the time police arrived on the scene.

Capt. Phil Trent, a spokesman with the South Bend Police Department, confirmed that several other people corroborated Chembers’ account of what occurred, but a friend of the driver said he’s not racist and would never use racial slurs or anything of the sort without first being provoked.

“It is a Confederate flag, I can attest to that,” said Cally Baker, who has been friends with the driver for over a year. “But it has a military emblem on it … so it was something he was proud of more or less because of the military aspect of it.”

Baker explained that the driver is an Army veteran and Arkansas native who was in the neighborhood visiting her when the incident occurred. She said her friend stopped at the store to ask for directions and the group of men standing outside starting yelling racial slurs at him first, which initiated his response to push back. Baker also confirmed that the man had a machete in his truck, but it was in the back, so there was no way he could have gotten to it.

Baker said she heard the gunshots from her house, which is only about a block from the store. Soon thereafter, her friend was knocking at the door.

“He came up to my door, and when he opened door he said he got shot, and I saw the blood that was in his mouth,” she said.

She called the whole situation “kind of crazy” and said she hopes it doesn’t turn into a “huge racial thing.”

No arrests have been made at this time and the shooter has not been located.