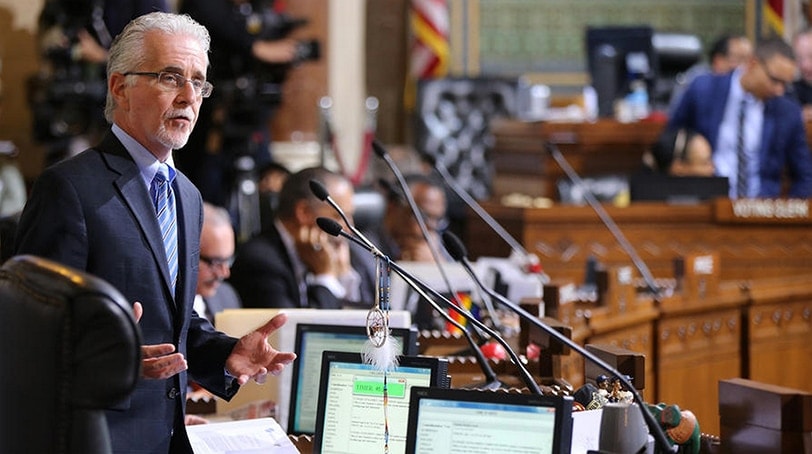 Councilman Paul Krekorian, author of the two gun control measures, at a Los Angeles City Council meeting in May. (Photo: The Associated Press)

“These mass shootings we hear about in the news so often that the names of the places have become part of the national lexicon,” said Councilman Paul Krekorian. “Columbine, Sandy Hook, Isla Vista, Aurora – these are places that have gained new significance to our nation because of the tragic mass killings that have occurred in those places.”

Some 15 years ago, California banned the sale and manufacture of high-capacity magazines, but didn’t ban possession.

This ordinance, as proponents see it, closes an important loophole for public safety.

In the past, it’s been difficult for police to identify magazines that were grandfathered in prior to the state’s prohibition.

“This is a small step. This is not something that is all of the sudden one fell swoop going to make our city crime-free or gun-violence free,” but it will help prevent gunmen from being able to shoot more people in a shorter amount of time, Krekorian said.

Councilman Mitchell Englander became a police officer because he wanted to prevent shootings like the one that took his uncle’s life years ago. He told the council that his uncle was shot in the back when he ran away from teenagers who were being initiated into a gang.

He said the Los Angeles Police Protective League supports the ordinance and offered an amendment to the measure seeking exemption for retired law enforcement personnel who have proper certification. The amendment will be voted on by the council next week.

The union is also seeking exemptions for retired officers on a similar measure requiring gun owners to either lock up their firearms or use trigger locks when not being carried. That measure will also be voted on next week.