Since a federal judge ordered the parents of a victim killed in the Aurora theater massacre to pay more than $200,000 in the defendants’ court costs, they said they’re forced to drop their appeal of the ruling because another loss may force them into bankruptcy.

Lonnie and Sandy Phillips lost their 24-year-old daughter, Jessica Ghawi, during the shooting in July 2012. A total of 12 people were killed and 58 others were injured when a gunman opened fire on the crowded movie theater.

With attorneys from the Brady Campaign to Prevent Gun Violence, the couple sued Lucky Gunner and other retailers with the intended goal of changing company policy and ultimately public policy in regard to gun and ammo sales as opposed to monetary gain.

“The NRA lawyers defended lucky gunner. It’s their money that’s behind this lawsuit. They’re making an example of Sandy and I. They don’t want anybody to file any suit against firearm dealers of any kind,” said Lonnie Philipps in an interview with MSNBC. 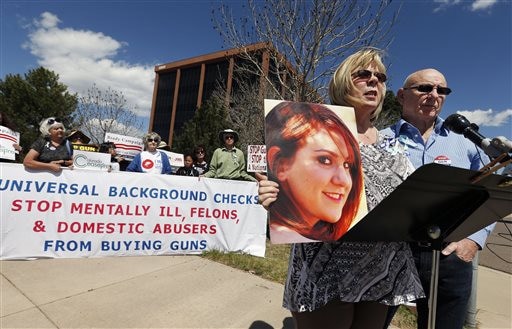 While it’s unclear if the attorneys defending Lucky Gunner have worked with the National Rifle Association in the past, they have worked for similar defendants, namely gun companies. But the NRA did celebrate the judge’s decision to rule against the Phillips and the Brady group.

Lucky Gunner announced that it would donate its reimbursed court costs to a gun rights advocacy group but with a twist. The company launched a contest to allow fans to vote for their favorite gun lobby, and the NRA has been raising awareness of the contest.

Following the ruling, the NRA penned a long blog post praising the Protection of Lawful Commerce in Arms Act, which the judge cited in his ruling, and described the Brady group as exploiting tragic circumstances to advance its political agenda — words that echoed the judge’s decision as well.

Federal Judge Richard Matsch, who was nominated in 1974 by President Richard Nixon and presided over the trial of Oklahoma City bombing defendants Timothy McVeigh and Terry Nichols, dismissed the case in April and berated the Brady group for suing retailers that followed the letter of the law with hopes of affecting public policy.

In the initial complaint, the Phillips argued the shooter, who had a documented history of mental illness but nothing that warranted police response, should have been denied by the online retailers when he tried to buy items he would later use to commit the heinous act. They also argued that the sheer quantity of the items — thousands of rounds of ammo, for example — should have raised a flag.

“We are not going to continue with the appeal. Our lawyers told us we could owe $500,000 if we continue to do that, so we’re dismissing the appeal,” Lonnie Phillips said about future legal action.

“We are going to go after this law through the legislative path, not the judicial,” he said. “Colorado law and federal law has made it very clear that anybody — if our daughter had been shot with a BB gun in the eye we would have a better chance of some kind of redress in the courts.”