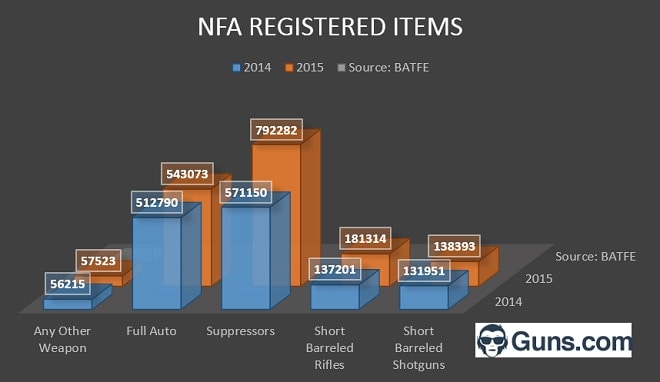 Data released by the Bureau of Alcohol, Tobacco, Firearms and Explosives this week show a huge jump in National Firearms Act items to include a 39 percent rise in the number of silencers and a 32 percent bump in short barreled rifles registered.

The information comes from the new Firearms Commerce Report, which contains information about domestic firearms manufacturing, as well as the importation and exportation of firearms.

Sweeping in its context, the report also gives the public a rare glimpse into the National Firearms Registration and Transfer Record, which is the federal list of all items, such as suppressors, SBRs, short-barreled shotguns, destructive devices and any other weapons logged under the NFA as of February 2015.

Comparing last year’s report with the new information shows the number of suppressors and SBRs registered on the NFRTR have jumped by a third in the past year. While the numbers for those two classes rose dramatically, the figures for all Title II weapons rose despite increased scrutiny from the nation’s firearms regulators. In all, over a half million new devices were added to the registry.

This translated into $27.5 million paid to ATF in 2014 through Special Occupation Taxes from over 3,700 NFA manufacturers and in transfer and making taxes. A total of 1.3 million forms were processed for these devices, a rate of over 3,500 per day, every day.

Suppressor advocates were impressed with the data coming from ATF, which show a continuation of the growing popularity of the devices.

“For the 11-month period that the NFA portion covers, the suppressor market grew more than it did in the previous two years combined,” Knox Williams, president of the American Suppressor Association, told Guns.com Tuesday.

Williams pointed out that 41 states to include Minnesota and Vermont – both of which recently changed their local laws – now allow civilian ownership of NFA-compliant suppressors.

“This unprecedented growth is in large part due to educational initiatives, and the passage of 11 pro-suppressor laws and regulations last year,” Williams said.

Suppressor manufacturers confirm that sales are up.

“We have seen an increase in sales and I think there are a few different reasons for that,” confirmed Brande Ehrman with Gemtech, a major player in the silencer game.  “Several more states, just this year, have made suppressor use legal for hunting. In addition to that, Gemtech has made some major efforts to educate people on the safety and comfort features offered by suppressor use. Education is key when it comes to the firearms industry and we are doing everything we can to make sure people are getting good information about suppressors and dispelling some of the myths surrounding them. Clearly our efforts are paying off as you can see by this increase.”

The National Shooting Sports Foundation, the firearms industry trade group, chalked up the increase to an expanding awareness of the utility of suppressors as a safety device that can dramatically cut down on noise pollution.

“As more target shooters and hunters realize the many benefits suppressors provide, their popularity across the United States will continue to increase,” Lawrence Keane, NSSF senior vice president and general counsel, told Guns.com.

With silencers and suppressors becoming almost commonplace, Keane said a move towards the eventual removal of such items from NFA jurisdiction would likely translate into a phenomenal jump in adoption.

“The growth would be even greater if suppressors were handled like other firearms without additional paperwork and regulation as required by the National Firearms Act of 1934. NSSF will continue to work toward normalizing the use of suppressors and reducing the paperwork and resulting delays law-abiding Americans endure to obtain a suppressor,” Keane said.