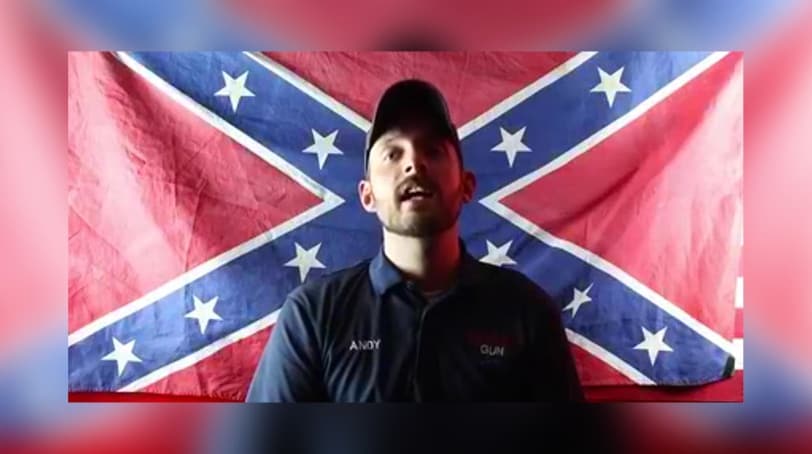 Taken from a screen shot of a video posted by Florida Gun Supply owner Andy Hallinan where he talks about designating his store a “Muslim-free zone.” (Photo: Facebook)

A Florida gun shop owner who declared his business a “Muslim-free zone” canceled a meeting with Muslims after he learned the group had been designated a terrorist organization by a foreign government in the Middle East.

“I had no idea what I was getting myself into,” said Florida Gun Supply owner Andy Hallinan in a video posted last week. “I’ve been trust into a political world where everyone has their own secret motivations and I don’t know who to trust.”

The gun shop owner agreed to meet with the Council on American-Islamic Relations, or CAIR, after declaring the group wasn’t welcome at his business. Once word spread, Hallinan said he received hundreds of emails informing him the group he planned on meeting with had terrorist ties.

“The reason they want to meet with me is they want to put a headline on their website that says ‘Islamophobe gun owner turns polite and sees that Islam is peace,’” Hallinan told Fox News Orlando. “There is absolutely no way I am going to help promote them.”

CAIR members had planned on attending a weekend concealed carry course and then sit as a group discussing their religion.

“They were excited,” said CAIR’s Florida spokesman Hasan Shibly. “This (was) a chance to reach out to the other side, to educate, to break down the walls of ignorance, because ignorance is our biggest enemy.”

In Hallinan’s first video on the subject, posted July 17, the gun shop owner decried the religion of Islam and “extreme political correctness.”

The original video was in response to news about the recent attack on a military recruiting station in Chattanooga, Tennessee, where four Marines were killed by a 24-year-old naturalized U.S. citizen originally from Kuwait.

“I have a moral and legal responsibility to ensure the safety of all patriots in my community, and so effective immediately, I am declaring Florida Gun Supply a ‘Muslim-free zone.’ I will not arm and train those who wish to do harm to my fellow patriots,” Hallinan said in the video.

Members of CAIR – which has been blacklisted by the United Arab Emirates on a list of more than 80, including ISIS, the Muslim Brotherhood, Al-Qaeda, Boko Haraam, Hezbollah and some 80 others – planned on attending a firearm training session over the weekend after calling on the Justice Department to investigate Hallinan’s actions as a possible federal civil rights violation.

“Andy’s comments, to be honest, were very hurtful,” Shilby said during a conversation with the gun store owner on Fox’s “The Power Panel.” I don’t want my kids to grow up thinking there are some places that are off limits to them simply because of the religion they choose to follow and practice.”

Though the group was put on the UAE’s list of designated terrorist organizations late last year, it isn’t on the United States government’s terrorism watch list.

The U.S. Department of State could not be reached by phone or email in time for story publication, but said in November it would seek more information from officials in the UAE, a strong U.S. trade ally in the Middle East.

CAIR, whose representatives said they’ve not had any dealings in the UAE, was named as a co-conspirator in a 2007 trial involving the Texas-based Holy Land Foundation’s diverting of funds to Hamas, The Washington Post reported. CAIR was not charged with any criminal activity in that case, but it’s likely the connection could be a reason for the American Muslim group’s inclusion on the terror list.

This isn’t the first case of a gun business enacting discriminatory anti-Islamic sentiment.

In response to the July 16 Chattanooga killings, a Kentucky business last week was declared a “Muslim-free gun store” by its owners, who even changed the digital sign in the store-front window to read so.

The DOJ set its sights on an Arkansas gun business in April for similarly declaring itself a “Muslim-free zone.” Jan Morgan, owner of the Gun Cave Shooting Range, declared in September her business wouldn’t be catering to Muslims.