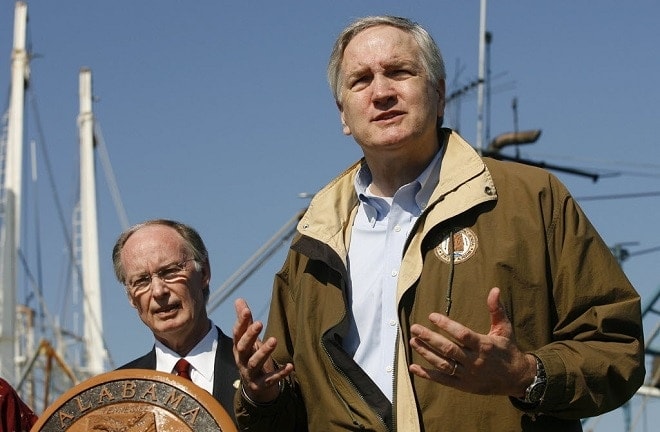 “Big” Luther Strange has been working with cities and counties across Alabama to point out gun rights infringements that are unlawful. (Photo: AL.com)

Strange, in office since 2010, published public statements this week disclosing his communications with a county sheriff over pistol permit irregularities and with a city mayor and attorney over local firearms prohibitions.

Pointing out that both were in violation of state law, his office decided not to file suit after each changed their policies.

In the North Alabama city of Moulton, Strange’s office followed up on a complaint the town of 3,400 had erected a number of signs banning the lawful carry of firearms in certain areas. Upon investigation, Strange found the city did in fact have signs posted at Moulton Recreation Center and H.A. Alexander Park, which the state’s chief law enforcement officer advised was in violation of Alabama’s preemption laws.

“I asked the City of Moulton to explain its legal justification for prohibiting weapons at the Recreation Center and Park,”Strange said.

When it was brought to the attorney general’s attention that in Lawrence County the sheriff issued permits which included a three-paragraph statement banning carry in the local courthouse, criminal justice building and any place that served alcohol – all of which are outside of the state’s guidelines – Strange asked for the legal justification.

After reviewing his policy, the sheriff changed his cards to read simply that, “License to carry a revolver or a pistol concealed on the person or in a vehicle is hereby granted, except where State law prohibits.”

Following this change, Strange agreed not to seek further action.

Last year, Strange told county election commissions they do not have the authority to forbid guns at polling places after a controversy over illegal gun free zones set up in Chambers County.

The National Rifle Association hailed the actions from Alabama.

“Our constitutionally protected right to defend ourselves is under constant threat, in many cases by anti-gun bureaucrats or politicians who have overstepped their authority,” said Chris W. Cox, executive director of the NRA’s Institute for Legislative Action in a statement emailed to Guns.com.

“Strange is putting all state bureaucrats and localities on notice that Alabama will not tolerate any violation of our right to Keep and Bear Arms,” Cox said.

Strange, who lost a run for Lt. Governor in the Republican primary before winning the attorney general office, has been outspoken in his support of Second Amendment issues to include joining in federal lawsuits seeking to overturn anti-gun laws in other states.

Earlier this month he was influential in helping justify Gov. Robert Bentley’s decision to order the Alabama Department of Transportation to repeal its 2013 ban on guns at rest stops, citing it did not comply with state law.

Last year, Strange, a member of the Republican Attorneys General Association, appeared in an ad for the group alongside other conservative AGs to bemoan federal overreach and advocate stronger defense of states’ rights.