What guns has Obama taken from you? 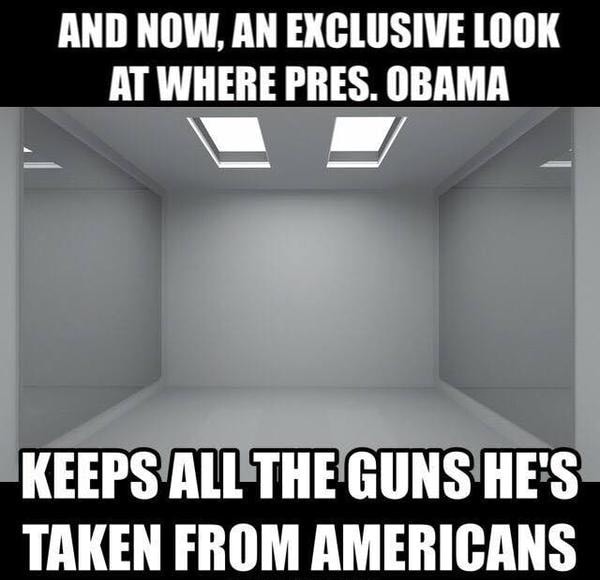 There’s a meme going around social media showing an empty room with the caption identifying that location as the place where Obama keeps all the guns he’s taken away.  The immediate point is that supporters of gun rights are paranoid for having concerns about gun control measures, but the implications are telling about the attitudes behind the image.

To analyze the assertion being made, we have to see what the president has done and attempted, as well as what was possible or politically practical during his time in office.  The Democratic Party held both the Senate and the House for Obama’s first two years, but since 2010, Republicans have controlled at least the House.  In that context, the chance of getting big gun control measures passed was slim, even if healthcare reform hadn’t occupied so much attention during the 2009 – 2011 term.

So what has Obama done or tried?  Recall the laundry list of proposals offered in 2013 in response to the Newtown shooting.  The calls for Congressional action were dead on arrival, while his executive actions were mostly minor.  He has acknowledged several times, including in an interview with the BBC on 24 July 2015, that the failure to achieve gun control is a big frustration for him.

Does this support the meme’s assertion?  No, unless we’re concerned only with pragmatic terms.  The results certainly matter, but we also have to consider the intentions behind action.  On that subject, we have the record of Obama’s statements on gun control from his time in the Illinois Senate onward.  These include the usual calls for bans on “assault weapons,” licensing of gun owners, registration of guns, and other limits on the right he claims to believe is an individual one.  I am pleased that the president is frustrated in his desires here, but I don’t give him a pass on that basis.

There is, however, a broader assumption in the meme—namely that the sum total of gun rights is ownership of guns—or more pointedly, one disassembled gun stored separate from its ammunition.  As long as we may have that, our rights are intact, correct?

Perhaps we’re supposed to be grateful for the generosity offered here.  But rather than an empty room supposedly the storage space for guns that haven’t been taken away, I have a different picture, an analogy for our current situation.

Imagine for a moment that I steal a piece of your car every day for a week.  Will you believe me on Saturday when I tell you that I don’t want to steal your car?  After all, I’ve left you a two wheels and the plugs where a radio could be replaced.

We gun owners have seen one effort after another to chip away at gun rights for decades—even longer, if we study the efforts at preventing freed slaves from owning guns in the south after the Civil War.  Apparently, we’re supposed to accept gun rights being shrunk more and more, no matter how many times gun control fails and ignore real solutions that would achieve the stated goal of reducing deaths.  We’re asked to believe that “no one is coming for your guns.”  That line is repeated each time a new demand is proposed to give up yet another measure of the right.

Only one answer to this makes sense.  We won’t accept the framing of the debate that claims our rights are safe no matter how much is lost.  The meme and the philosophy behind it must be called out for what it is, a rejection of the concept of rights.