An anti-gun organization in New York on Thursday debuted a social media campaign to convince Apple to remove the ideogram depicting a gun from their iPhones.

New Yorkers Against Gun Violence kicked off their “Disarm the iPhone” drive this week with a website, video and press release targeting the popular mobile devices. The group cautions that the emoji, one of hundreds on the product that come preloaded from the factory, reflects the ready access to guns in the country.

“We realized that many Americans unknowingly carry a gun with them every day. The one that was given to them without a background check: the gun emoji,” reads an open letter to Apple CEO Tim Cook.

The group, who made headlines for their fake New York City gun shop staffed by an actor best known for his role in a hyper violent video game, admits that deleting the gun emoji would be a symbolic gesture, but one that would be important. They feel it will show Congress that both gun-owning and non-owning Americans can come together to demand expanded background checks to include virtually all gun transfers. 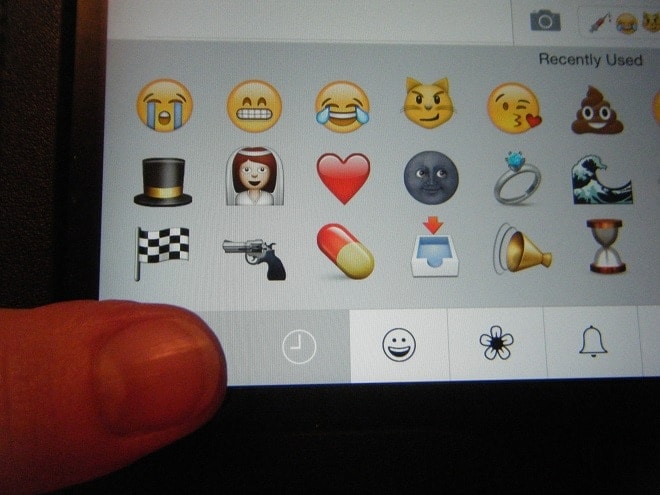 Apple devices, along with those of most major smart phone makers, contain a gun emoji that a controversial New York group wants removed. (Photo: Chris Eger/Guns.com)

“The gun emoji has taken root in our culture and our digital conversations,” said Leah Gunn Barrett, NYAGV executive director in a statement. “Let’s all call on Apple to get rid of the virtual gun and publicly join our call for universal background checks on all gun sales.”

While other smartphone manufacturers, to include Motorola and Samsung, also have preloaded gun symbols included in their devices, NYAGV did not include them in their campaign. Further, they do not mention The Unicode Consortium, a non-profit that works to ensure interoperability of the various smiley faces and emoticons across multiple devices.

On the site set up for the Disarm the iPhone initiative, NYAGV goes on to repeat the oft-quote statistic that 40 percent of gun sales in America are made without a background check.

This stale figure often pops up in rhetoric on gun violence in the country and has been widely debunked.

Based on a 1994 telephone survey of 251 people conducted just as implementation of the FBIs NICS system and requirements for background checks for sales through Federal Firearms License holders was coming into effect, its continued quotation was given three Pinocchios by fact checkers from the Washington Post in 2013.

Four Pinnoccios would denote a completely inaccurate statement, by the Post’s rating standard.