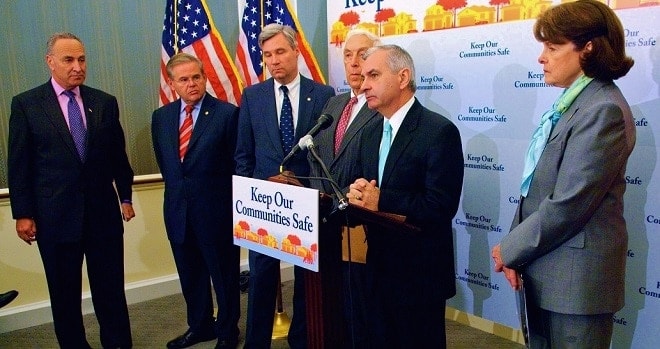 A baker’s dozen of the Senate Democratic Caucus to include Jack Reed, Charles Schumer and Dianne Feinstein are asking the gun industry to change how it makes transfers. (Photo: reed.senate.gov)

A group of 13 Senate Democrats are challenging the nation’s licensed gun dealers to stop transferring firearms to those who do not complete a background check.

The group is seeking to have the industry itself close what is increasingly termed the “Charleston Loophole,” the exception in place since 1993 to the Brady background check law that allows a gun dealer to transfer a firearm to someone who has a check delayed more than three business days.

It was disclosed by the Federal Bureau of Investigation earlier this month the suspect in the Emanuel AME Church shooting in Charleston, South Carolina, obtained his firearm after the bureau failed to issue a “deny” order within the three day window due to procedural errors.

This the lawmakers feel should be voluntarily corrected by the industry itself and as such wrote an open letter to Cabela’s, EZ Paw, Bass Pro Shops, and the National Shooting and Sports Foundation demanding just that.

“In the last five years, the ‘default to proceed’ loophole has led gun retailers to proceed with 15,729 firearm sales to ‘prohibited people’ – individuals who were deemed ineligible to purchase a firearm once their background checks were completed,” the senators wrote in their letter.

“After the horror inflicted upon the Emanuel AME Church in Charleston, no responsible gun retailer should transfer a gun without first conducting a complete background check,” the letter concluded

When asked by Guns.com for a response to Reed’s letter to the gun industry, Lawrence Keane, NSSF senior vice president and general counsel, advised the lawmakers are missing the mark.

“Rather than focusing on the back-end of the National Instant Criminal background Check System, as this proposal does, we would urge Sen. Reed to lend his influence to helping ensure that: One, all legally appropriate criminal and mental health records are entered into the system so that delaying purchase determinations (99 percent of which are eventually approved) becomes far less of an issue or no issue at all; and Two, that the administration of the system gets the support it needs at the federal and state levels so that all appropriate records under current law are entered in a timely, accurate and complete manner,” Keane said.

“If the Senator had contacted us prior to publicly releasing a letter we have yet to receive, we would have been happy to explain this more effective solution to him,” he said.