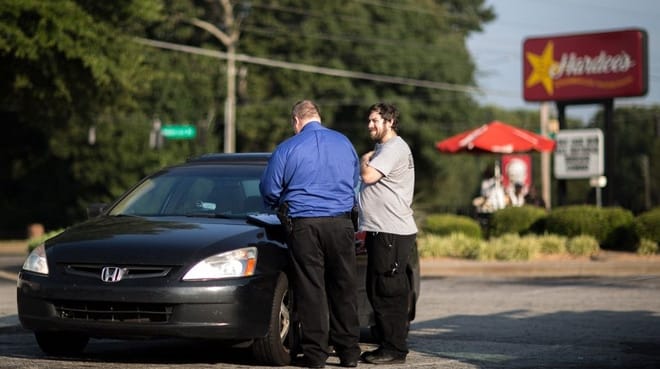 Joshua Hamadi (right) said he hopes the 15-year-old will survive, but if faced with the same scenario, his actions would be no different. (Photo: Branden Camp/The Atlanta Journal-Constitution)

An attempted robbery early Tuesday morning in DeKalb, Georgia, was thwarted by an armed citizen who protected himself and another man.

Joshua Hamadi, whose job is to keep truckers from illegally parking on private property, was sitting in his car in the parking lot where he works, filling out paperwork on a trucker who came onto the property, when a black Kia Spectra pulled into the parking lot.

“For five or 10 seconds they didn’t do anything,” Hamadi, 25, told The Atlanta Journal-Constitution.

Hamadi said he thought it was odd they were just sitting there, but he also had a holstered .40-caliber Glock at his side and, feeling uneasy about the situation, pulled it out just in case. A move that soon thereafter proved smart.

Moments after the car pulled up, two people, who were wearing ski masks and armed with guns, exited the car and ran toward Hamadi. Within seconds, the two had their guns about a foot from Hamadi, who had one thought at that moment.

“My first reaction is, my life or theirs,” he said.

So Hamadi pulled his own gun and fired, striking one of the would-be robbers in the hip. Meanwhile, the second suspect and the driver took off, leaving his injured accomplice behind.

As Hamadi kept an eye on the injured suspect, he told the truck driver — who had been parked in front of Hamadi’s car, waiting for the paperwork to be completed when the attempted robbery went down — to call 911.

But while Hamadi and the truck driver thought the incident was coming to a close, a few minutes later the black Kia returned. This time, Hamadi emptied his magazine, persuading the suspects to go away, but not before Hamadi blew out one of their tires.

Police arrived a few minutes later and found the Kia, which was previously reported stolen, about a mile away.

The injured suspect, who was not publicly identified but discovered to be just 15-years-old, was transported to the hospital where he was last listed in stable condition.

Hamadi admitted that his adrenalin kicked in during the attack, but he was somehow able to still keep his cool. And as for the truck driver? Hamadi said he was very grateful they were both able to go home to their families that night.

The investigation is ongoing, but Capt. Stephen Fore, spokesman for the DeKalb County Police Department said no charges are expected to be filed against Hamadi, who acted in self-defense.