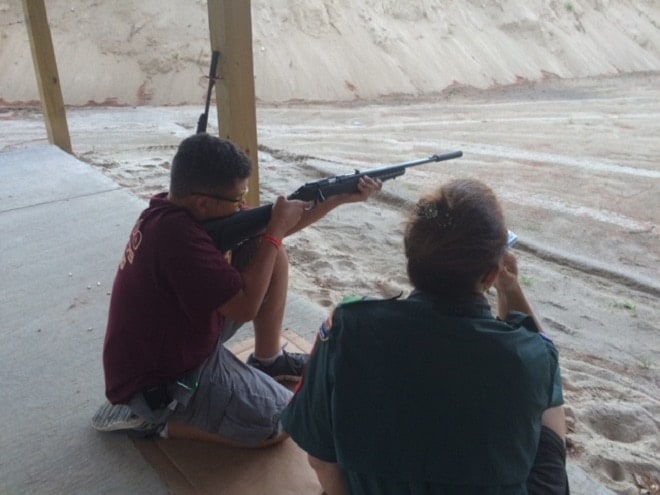 This summer, Boy Scouts in New England will be using suppressors to help make gaining merit badges in the shooting sports quieter to achieve. (Photo: Gemtech)

Scouts in Maine are getting a chance to participate in the shooting sports with an increased level of safety on behalf of new suppressors, rifles and ammunition contributed free of charge.

This spring, the Boy Scouts of America’s Pine Tree Council, which serves ten counties in central Maine, took possession of a windfall of gear with the help of gun rights groups and the shooting industry. That equipment is allowing the scouts at Camp William Hinds, a 280 acre facility in the state’s Sebago Lakes Region, to use suppressor-equipped rifles, pistols and shotguns during its week-long summer camps this year.

The equipment came from a variety of vendors to include Sturm, Ruger & Company, which chipped in eight American Rimfire .22 rifles with threaded barrels; a local federal firearms license holder, Furlong Custom Creations, who handled the transfer paperwork; and two suppressor companies, Gemtech and SilencerCo, who contributed both devices and ammunition.

Gun rights groups to include the National Rifle Association helped make it all happen. NRA Education and Training Committee Chairman Joe Debergalis explained to Guns.com that it was a team effort all geared with one thing in mind: helping the scouts train as safely as possible.

The Council is using the suppressors for scouts seeking rifle and shotgun merit badges while teenage Venture Scouts are utilizing the same .22 suppressors for pistol programs.

The program is an important milestone for the scouts. Venture Scouts, aged 14 and up, are using suppressor-equipped Smith and Wesson 22s in their pistol course. (Photo: Gemtech)

“Camp William Hinds is moving into the future by becoming the first camp in the Boys Scouts of America to use suppressors to quiet the sounds of their guns,” Knox Williams, president of the American Suppressor Association, told Guns.com. “We are proud to support their efforts to make the shooting experience safer and more enjoyable for their scouts and neighbors. We hope that this initiative can serve as a model for councils nationwide.”

Williams contends the devices are gaining more acceptance as increased awareness of their functionality as safety devices replaces Hollywood misconceptions.

“Over the past five years, suppressors have made stride after stride towards becoming a mainstream shooting accessory,” he said. “By adopting suppressors, Camp Hinds and the Pine Tree Council have helped us take another major step forward, showing that suppressors are not the silent and clandestine devices that they are made out to be, but are instead safety devices that will make the Rifle Shooting Merit Badge a safer and more fun experience for the Scouts.

“As an Eagle Scout, I wish that this had been an option when I earned my rifle shooting merit badge,” Williams said.

“Gemtech was honored for the opportunity to help make an already great scouting program even better,” Gemtech Project Manager Brande Ehrman told Gun.com. “This is the least we can do considering that the children participating in this program are not only future firearm and suppressor owners but future leaders of our country; Leaders that will hopefully be passing pro Second Amendment laws for years to come.”

Ehrman explained it was their hope that other Boy Scout leaders will see how dramatically suppressors improve the shooting experience and incorporate them into their shooting programs across America. 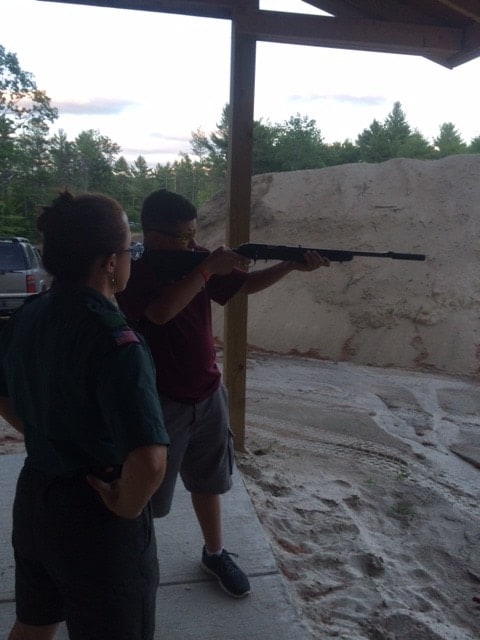 She pointed out, rather than stir up controversy, putting National Firearms Act regulated firearms in the hands of youth is a teaching moment.

“I don’t think anything gets anti-gunners more fired up than kids and guns. We at Gemtech feel like that emphasizes the need for education even more and the Boy Scout program is the perfect opportunity to teach people the many benefits of shooting suppressed,” Ehrman said.

She feels the range program will demonstrate that, by using suppressors, kids are able to clearly hear and understand their instructor on the range without risking hearing damage. Another benefit to shooting suppressed is that people living in homes neighboring the range will not be disturbed by gunfire. This applies to wildlife as well.

“The fact that more and more states are making suppressed hunting legal is a sign that folks are realizing that suppressors make shooting safer and more enjoyable and are willing to incorporate them into mainstream shooting sports,” she said. “This scouting program is another step in the right direction and Gemtech is excited to be an integral part of that.”